We currently have three Western grey kangaroos. A breeding pair and their off-spring. They can be found in Wallaby Outback.

The western grey kangaroo (Macropus fuliginosus melanops) is one of the largest and most common of all kangaroos. They have light grey-brown to dark brown fur, a finely-haired nose, large ears, a black tip to the tail and buff patches on their legs and forearms.

The male is much larger than the female with long, muscular shoulders and forearms, heavily clawed forepaws, and thickened skin over their stomach, which helps them to absorb the impact of kicks during fights.

The western grey kangaroo has powerful, enlarged rear legs which support the familiar leaping motion, this is also aided by the long tail, which acts as a balance, and by an ankle adaptation which prevents the foot rotating sideways, so that the kangaroo cannot twist its ankle while hopping.

The western grey kangaroo is most active from late afternoon to early morning, resting during the day in the shelter of trees and shrubs.

Western grey kangaroos are herbivores and their diet consists mainly of grasses, some herbs, leaves, tree bark and shrubs, it also has a high tolerance to certain plant toxins.

They are a social species and usually lives in groups, known as ‘mobs’, of up to 40 to 50 individuals. During the autumn and winter, the males tend to live in large groups away from the females and participate in threat displays and fights to establish dominance, with the most dominant males having first access to the females in the spring.

Although breeding can occur all year-round, births usually peak between September and March. After a 30 day gestation the single, tiny new-born climbs unaided through the female’s fur and into the forward-facing pouch, where it attaches to one of four teats. As with other marsupials, most development occurs in the pouch, with the young, or ‘joey’, first emerging after around 280 days, and suckling until about 17 months old.

Contrary to its common name, they are found throughout the south of Australia, from the Indian Ocean in Western Australia to western Victoria, New South Wales and southern Queensland. They are found in open woodland and forest, scrubland, heath and grassland. 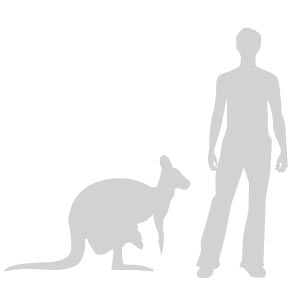