There are three giant anteaters here at Edinburgh Zoo - Lucifer, Nala and their son Zeferino.

You can help feed and care for our anteaters and other threatened animals around the world by donating today - if you can, please support our Survival Fund.

Our anteaters are part of the Endangered Species Breeding Programme.

Giant anteaters were once found across much of South America but populations are in decline. They face many threats in the wild but are mostly at risk from humans and human activity. They are frequently hunted for food, are killed as pests, and are also taken for the illegal pet trade.

Habitat loss and destruction is another major threat to this species. More than half of their scrub forest and grassland habitat in the Brazilian Cerrado has been lost to agriculture over the last 35 years. The remaining habitat is becoming increasingly fragmented by roads and highways, leading to a high mortality rate through vehicle collisions. Giant anteaters are among the animals most frequently killed on these roads, and road accident fatalities now pose a serious threat to their long-term survival.

The Anteaters and Highways Project was launched to address this threat. Through tracking and monitoring giant anteaters, as well as connecting with and educating local communities about these misunderstood animals the project aims to inform road management strategies in Brazil and help save an iconic New World species.

Find out more about the Anteaters and Highways Project. 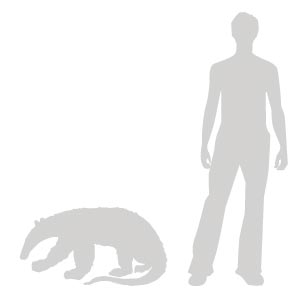