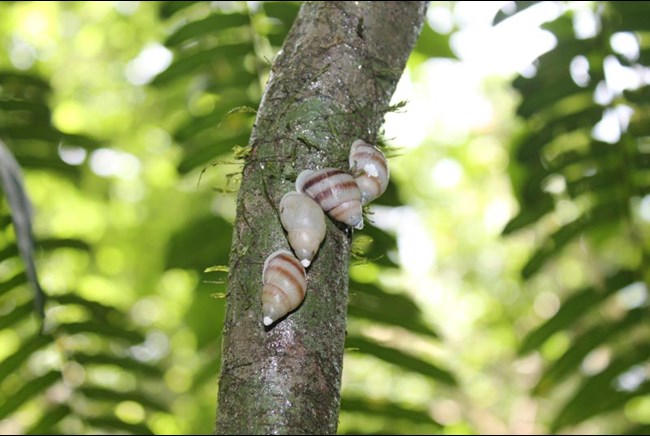 Above: Partula snails released in French Polynesia during 2018

Partula snails are a very small but very important species within our conservation work at Edinburgh Zoo. There is a lot of information about why these gastropods are so endangered and the role RZSS plays in the global initiative to restore wild populations in previous articles but in summary, human actions, however well-intentioned, led to the decimation of native partulid snails in French Polynesia. These tiny snails may seem insignificant but they play an important role in the local ecosystem as detritivores, helping to recycle carbon in the forests.

I have been working with this endangered species for over 10 years, including helping to increase the population as part of the conservation breeding programme. Over the last three years, we have contributed thousands of snails towards to the reintroduction programme and during August, I was fortunate enough to travel out to French Polynesia to help with the latest round of snail releases. 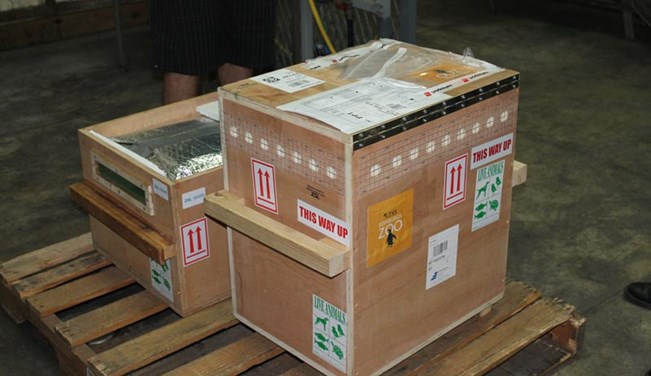 Above: The snail shipment arrives
Below: Partula snails in holding tanks prior to release 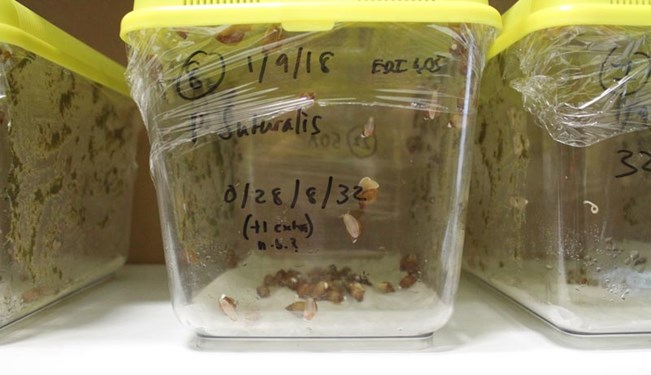 This year, over 1,200 snails were bred at the Zoo and sent for re-introduction. My trip to Tahiti was planned in order to arrive just ahead of this shipment. On arrival I met up with Dr Trevor Coote, a field biologist who works in Tahiti and the surrounding islands on the monitoring of the Partula snail. Trevor is a geneticist by training and has lived and worked in Tahiti for 15 years. His role is funded by the Partula project and he is an invaluable expert on both the species and their native habitat.

Tahiti and Moorea, the islands which I visited, both have their extremes. The forest, especially at high altitude, is truly stunning and awe-inspiring but is also sadly under threat from non-native plant species. In the local communities there is also a very apparent diversity of wealth. Being thousands of miles away from the mainland, the vast majority of consumables are shipped in, making everything very, very expensive. 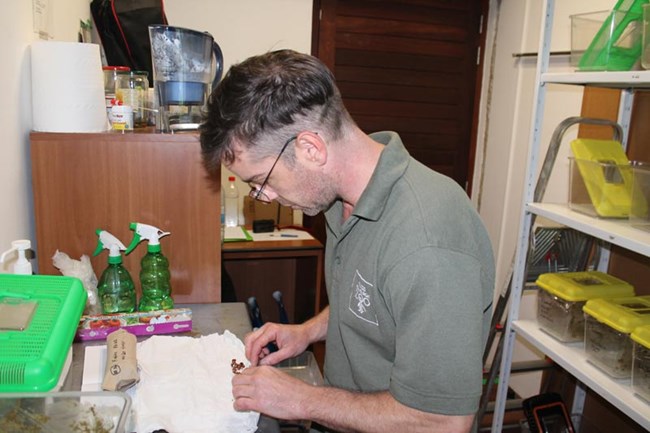 Above: Gareth inspects all 2000 snails individually after their arrival

We had a few days to prepare before the shipment arrived, which it finally did after a few minor delays. Then came the delicate task of unpacking all the snails, assessing their health and recording any in transit deaths which may have occurred. Every measure is taken to ensure the snails safety and wellbeing during their journey, however there are always some factors that you can't account for, especially with a shipment of around two thousand. So it was a relief to find that almost the entire group had arrived in good health.

The first of the re-introductions took place two days after their arrival. We identified suitable sites within previously recorded home ranges for each species and placed the relevant snails into plant pots attached to trees. Each pot is labelled with the species and the plot number to help facilitate post release monitoring. We stood back and watched as the snails emerged… slowly! 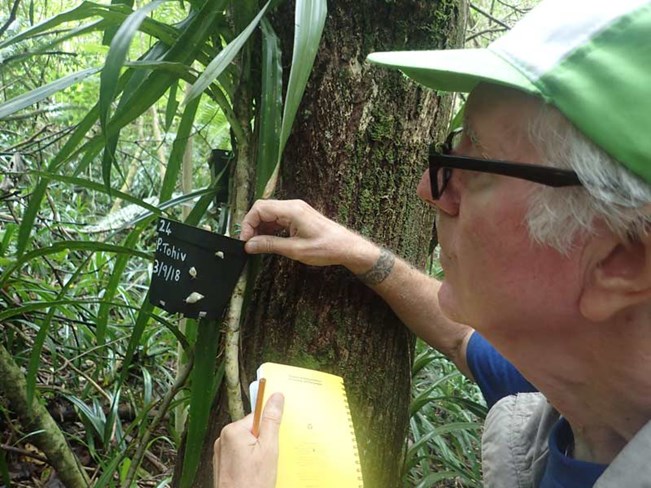 Above: Dr Trevor Cootes prepares a snail release site
Below: A batch of snails emerge from their release pot 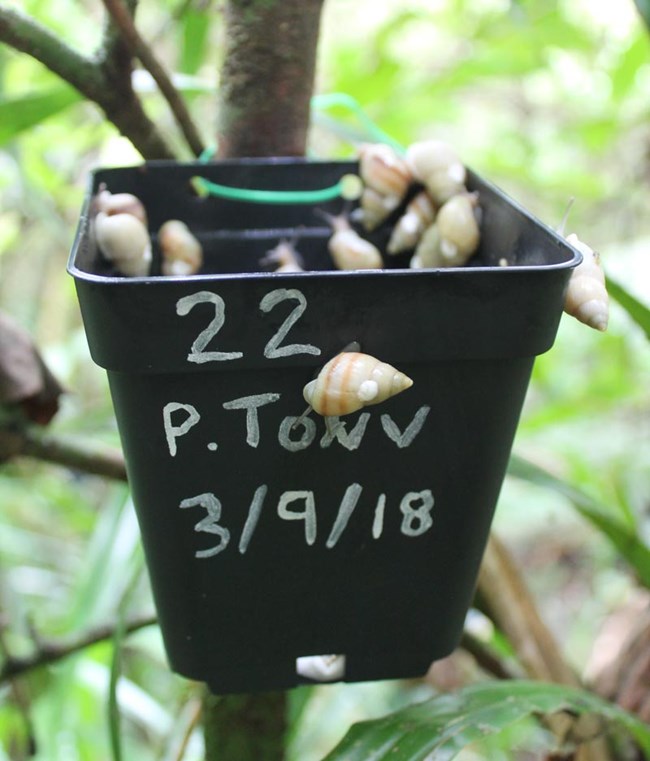 In total it took around five days to release all two thousand snails. This was followed by a week of monitoring, returning to each site and looking for any live snails in the trees or empty shells on the ground.  It is relatively straightforward to identify snails released by the project, as each snail is given a colour marking specific to the year of their release. This has all sorts of benefits when monitoring and reporting on the project further down the line and one of the undoubted highlights of my trip was finding individuals from previous releases alongside snails released this year. 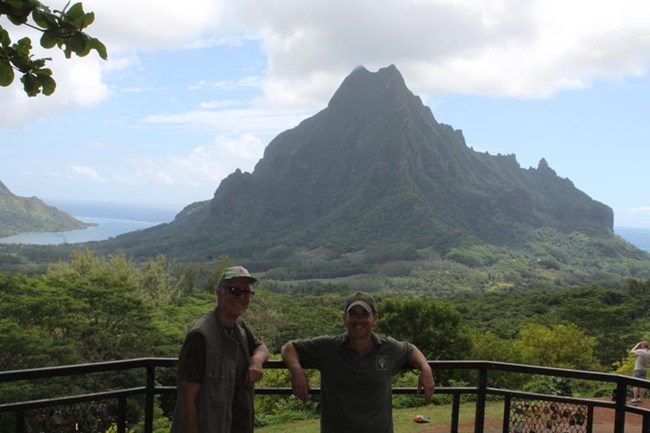 Above: Dr Trevor and Gareth take in some of the island's breathtaking scenery
Below: Partula snails from 2017 (blue) and 2018 (white) re-introductions were observed mixing together at some of the release sites 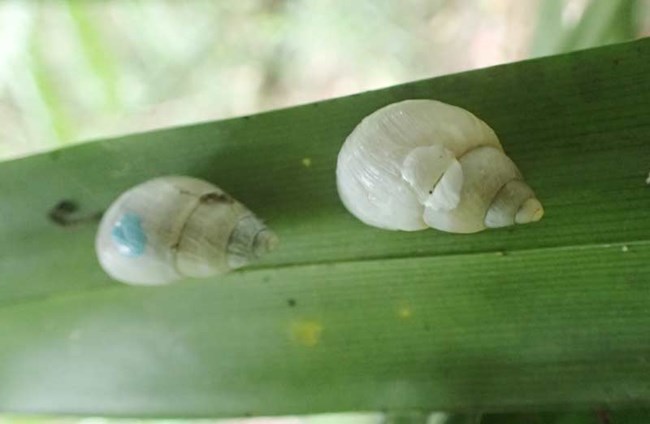 It is such a rewarding experience to be able to actively participate in the reintroduction of a species back to its natural habitat, especially when the animals involved are individuals that I have personally worked with and help rear.

Our success within the Partula snail programme is owed to those staff who began the work here at Edinburgh Zoo many years ago and to those who now form the wider project partnership, working to ensure this initiative goes from strength to strength. It is not uncommon for people to say 'it’s just a snail', but it is a species that is very important for its native ecosystem and local people. And what is more, as a conservation success story, through the collaboration of animal collections around the world, it can act as an example as to how other species might be saved via conservation breeding.

For me personally, after such a long time working with the species, it was a huge deal to be able to see the end product of the team's work and this experience will stay with me for a long time. It has proved that a project such as this can make a difference.