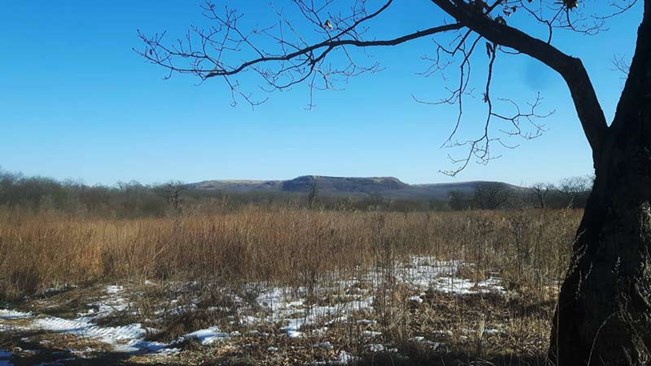 Above: Land of the Leopard National Park in Russia, which encompasses 60% of the world's Amur leopard habitat

With the arrival of the polar bear cub late last year, it has been quite the start to 2018. This new arrival is a momentous occasion for the Park, however it doesn’t mean that our work with other species stops, far from it. In February I was lucky enough to visit Primorsky Krai in the Far East of Russia for an RZSS funded field trip, where I spent three weeks learning about and getting involved with Amur leopard and tiger conservation.

Expanding our knowledge of these species is very important as we house a pair of critically endangered Amur leopards at the Highland Wildlife Park in a new off-show breeding facility. The Amur leopard is a species that I am particularly interested in, especially as any cubs born at the park will hopefully go on to augment the wild population. My time in Primorsky Krai was split between two areas: Land of the Leopard National Park (LLNP) in Barabash and the Inspection Tiger Rehabilitation Centre in Alekseyeva.

The Land of the Leopard National Park covers 60% of all Amur leopard habitat, with around 70 individuals being found here. There are also estimated to be 26 Amur tigers  in the national park. Established in 2012, the National Park merged 3 former reserves including Kedrovaya pad, the oldest zapovednik (nature reserve) in Primorsky Krai, and includes a fourth area along the border with China, covering 650,00 acres in total. 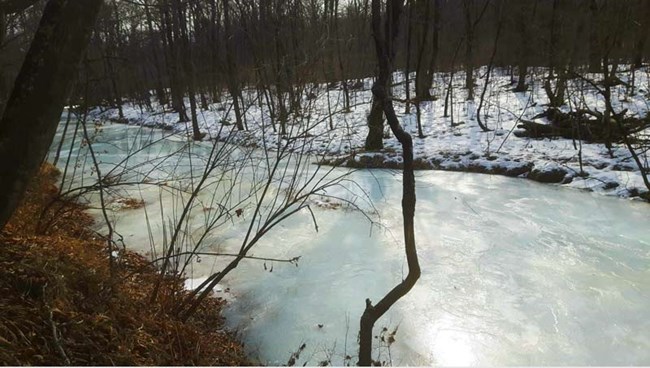 Above: A frozen river in the National Park

Below: Some of the rocky ridges and cave in the Park that provide ideal leopard habitat 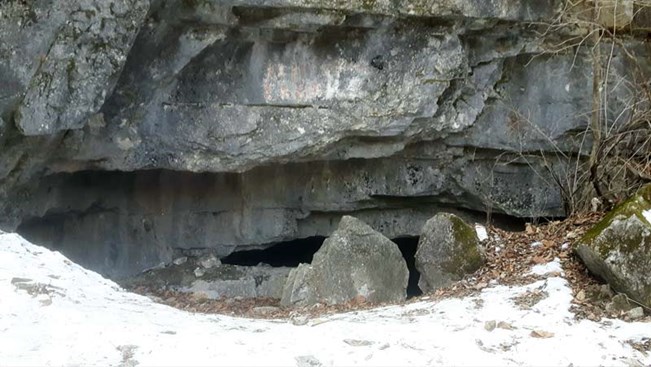 Originally I had hoped to help with the winter surveying of Amur leopards during my time at LLNP. Surveying is always done during the winter months as tracks are easier to find in the snow, and it also allows for more consistent data. Unfortunately a lack of fresh snow this year meant that the field biologists could not carry out this important fieldwork.

Despite the lack of snow, I still managed to spend time in the field looking for tracks and other signs of Amur leopards, tigers and ungulates in the few patches of snow that was laying on the ground at the Kedrovaya Pad. This area is the of the LLNP is completely protected, meaning that no cutting of trees is permitted and people aren’t allowed into the reserve without permits. We found no sign of leopard or tiger but plenty of ungulate tracks and signs, most of these were at least a week old. We saw tracks and faeces from roe and sika deer and scrapes, droppings and tracks from wild boar in the forests. 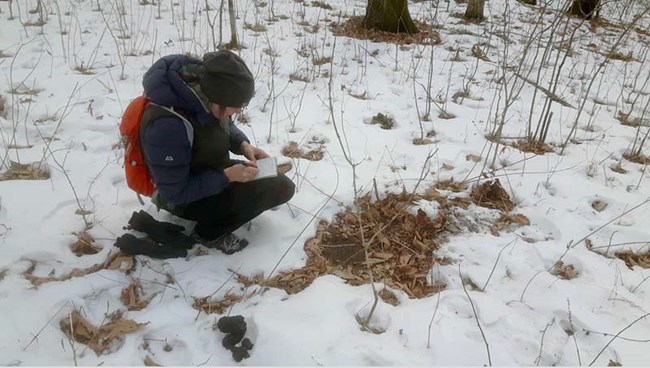 Above: Out in the field looking for signs of leopard, tiger, and ungulate activity.

Below: Old footprints demonstrating why fresh snow is so important for conducting field survey work. 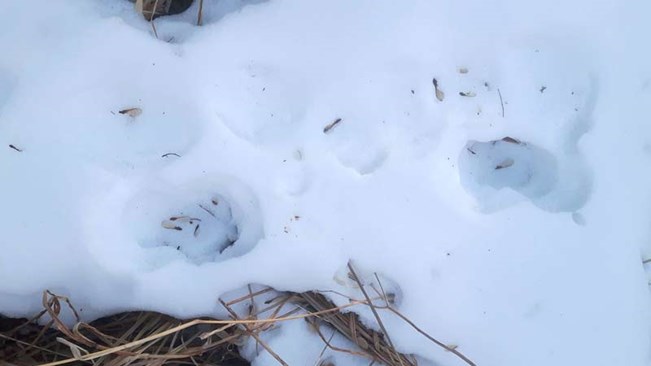 Although we found no signs of leopard activity, the presence of sika deer was still encouraging as they are the main prey species for Amur leopards. We also found plenty of rocks and caves on top of the ridges, perfect resting places for leopards and sleeping bears!  It was pretty incredible to be standing in the midst of this amazing Amur leopard habitat and to think that leopards had potentially passed through here. 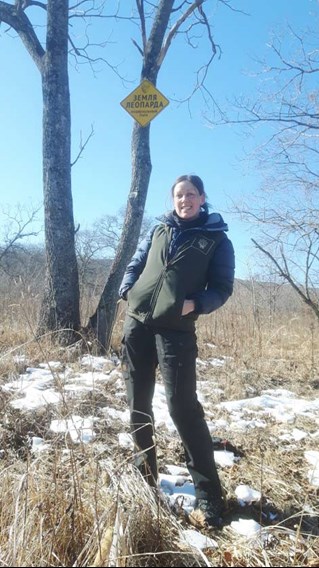 All data collected was logged with GPS coordinates, and included information on the depth of snow, as well as evidence of any human activity. During my time in the field, I saw first hand the effects of humans. Only a few metres into the reserve from the road we found several trees which had been cut down, their trunks removed and tyre tracks were obvious in the snow. Deeper into the forest we found a lot of buried litter, poachers coming into the forest are not only taking animals but ginseng root and Korean pine nuts which are highly sought after.

Away from the field and there is plenty of work to be done behind the desk. There are 380 camera traps throughout LLNP which are checked every 6 months, so there is no shortage of imagery to sort through. It was a thrill to help sift through images of many species captured including: leopard cat, Amur badger, racoon dog, Manchurian hare, red fox, black and brown bears, as well as Amur leopard and tiger. However, amongst all the animal photos, there were plenty of just grass and branches that had set off the camera traps too! The experienced team at the Park install the camera traps along animal trails, paths and ridges. In each location two cameras are set up, one on either side of the trail, to capture both sides of the animal. This enables biologists to identify an individual with greater accuracy, with coat patterns used as identification as well as any visible genitalia.

The rehabilitation centre in Alekseyeva opened in 2012 and is funded by the International Fund for Animal Welfare (IFAW). Its primary objective is to rehabilitate wild animals for release. There are three criteria for bringing animals into the centre: if the individual is injured, if the individual is orphaned, or if the individual is coming into conflict with humans. The centre is set up to house large predators during a rehabilitation period, with large enclosures all monitored by CCTV cameras. There is a strict hands off policy to minimise human contact and live prey is brought in from local deer farms for feeding.

During my visit I spent time observing the three current resident tigers on the monitors. At that time, the most recent animal to arrive was a tigress captured after killing 15 dogs in a village near Ussurisk. This is abnormal behaviour for a wild tiger and could indicate underlying problems. Tiger conflict is a problem in Primorsky Krai, which is why there is the need for such a centre. It is hoped that in a few months this tigress can be released again. 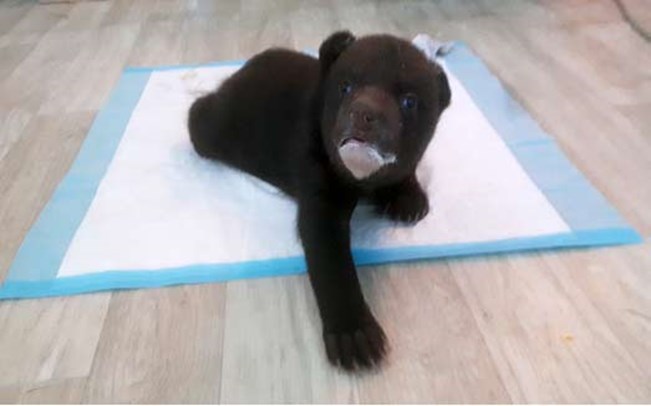 Above: A Himalayan black bear cub brought to the Alekseyeva

Whilst at the centre a Himalayan black bear cub was also brought in. At about a month old this cub needed feeding every 2 hours, and I was to undertake this task during my last week in Russia. An amazing experience, but incredibly sad and stressful at the same time. It is hoped that the cub can be released back into the wild in the Autumn. The centre has rehabilitated 10 bears prior to this, but this cub is the youngest they have had at the centre.

The 3 weeks went by in a flash, and it is fair to say that Russia was not the easiest of countries to visit and travel around when you don’t speak the language well, particularly in the more remote locations. At LLNP I was also warned not to go out exploring alone as I may encounter hostility from local people, as the surrounding area was quite poor. Despite being out of my comfort zone for much of the trip, it was an amazing experience and I met lots of incredible people. I hope to go back and carry out the winter survey in the near future. There are a lot of learnings about the conservation of Amur leopards and tigers that I have been able to bring back with me and I am excited to help put this into practice back at RZSS.

We hope to post updates from our own leopard facility at the Highland Wildlife Park soon.