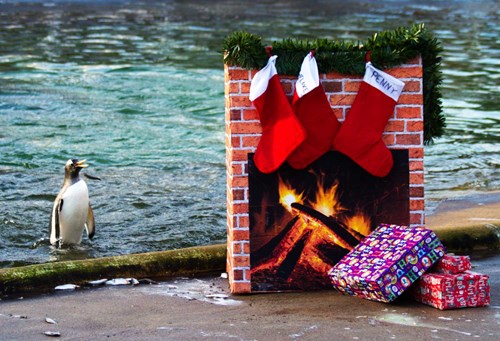 Twas, a couple of weeks before Christmas and all through the Zoo, the animals were stirring, waiting for Saint Nick. The penguins in particular were all in a ruffle, eager to peek into their Christmas presents.

Christmas is just around the corner and to help get into the festive spirit, the penguin keepers at RZSS Edinburgh Zoo have created a large fireplace, hung with stockings and surrounded by Christmas presents for the penguins. Photographers are invited to photograph the penguins with their Christmas-themed enrichment. 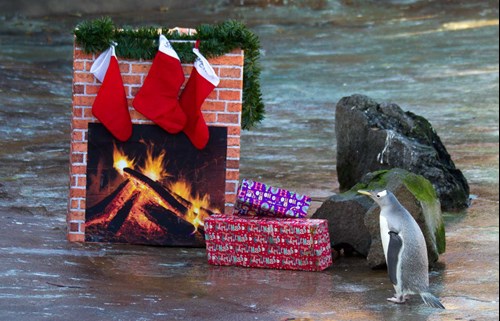 Dawn Nicoll, Senior Penguin Keeper at RZSS Edinburgh Zoo, said: “We love making enrichment for the animals, especially at Christmas time, as we can get really festive with our creations. The penguins were immediately intrigued by the large cardboard fireplace and Christmas presents and quickly waddled over to investigate the new, colourful items in their enclosure. The penguins are very inquisitive, especially the gentoos which were the first ones to take a peek.”

Enrichment plays an important role in the animal’s lives, helping to encourage natural behaviours. RZSS Edinburgh Zoo has a dedicated enrichment team that integrates five different types of enrichment into the animals’ lives, including environmental, habitat, sensory, food and social enrichment. Members of the public can also donate special animal-friendly Christmas gifts to the Zoo, via the Zoo’s Amazon wishlist: https://www.amazon.co.uk/gp/registry/wishlist/1NE1L5UV462AL

RZSS Edinburgh Zoo is home to three species of penguin: northern rockhoppers, gentoos and king penguins. Penguins have been an integral part of RZSS Edinburgh Zoo for over 100 years and the Zoo has the largest outdoor penguin pool in Europe. They were one of the first species that arrived and the Zoo and the Society became world renowned when they were the first outside the southern hemisphere to breed king penguins. The world famous daily Penguin Parade began in 1951 when a keeper accidentally left the gate open and the penguins went for a short walk and then returned to their enclosure – keepers still open the gate every day at 2.15pm and birds who voluntarily want to take part go for a short walk outside their enclosure.

After this photo call took place, and following the Scottish Government’s announcement of an Avian Influenza Prevention Zone in Scotland, RZSS has taken the precaution of closing all walk-through aviaries until the restrictions are lifted. We have also temporarily suspended the Penguin Parade and have put in place increased biosecurity measures in line with Scottish Government recommendations.

Animal welfare is our number one concern and we will always take precautions to minimise risk to our animals.