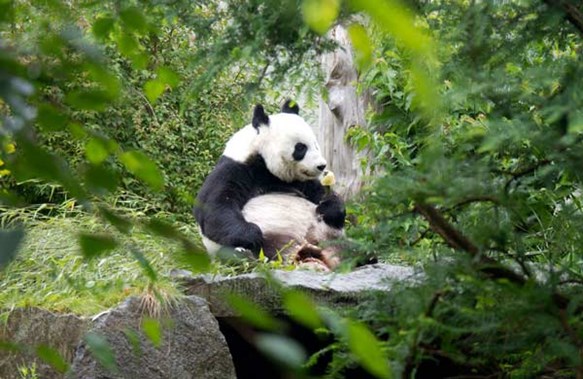 The endangered giant pandas thoroughly enjoyed their treats, which were made from mushed up apple and water plus their favourite item of food – bamboo – which was used as a popsicle stick. The bears immediately got their paws on the panda-sicles and whilst neatly holding the bamboo stick, slowly started to nibble on the novel frozen treat. 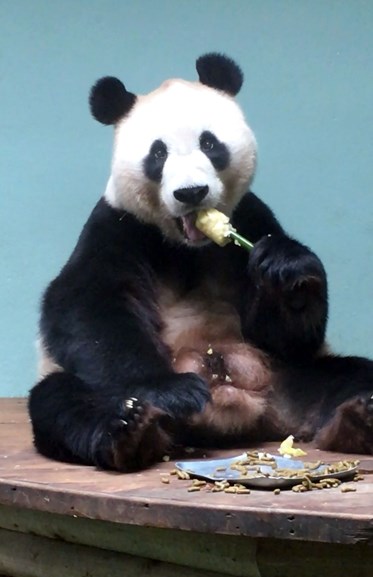 Darren McGarry, Head of Living Collections at RZSS Edinburgh Zoo, said: “Yang Guang and Tian Tian really enjoyed their frozen treats. Tian Tian preferred to enjoy her ice lolly outside, whilst Yang Guang wanted to eat his lolly inside instead. It was the very first time that we tried making panda-friendly ice lollies, but the keepers were delighted to see the two pandas picking up the lollies and enjoying them.  Whilst pandas are known for having a predominantly bamboo-based diet, they do also enjoy special treats of fresh fruit and vegetables, as well as honey and specially made panda cake.

“The ice lollies are a fantastic form of enrichment, with the cold ice providing a sensory stimulation. Enrichment forms an important part of our animals’ care and we always ensure we provide the animals with a wide and varying enrichment programme.”

The two pandas have celebrated their previous birthdays at RZSS Edinburgh Zoo with special panda cakes and beautiful handmade bamboo number structures as well as a tiered ice cake.

Yang Guang and Tian Tian arrived at RZSS Edinburgh Zoo on 4 December 2011 and they are the first adult giant pandas to have ever come out of China.

Giant pandas are listed as Endangered on the IUCN Red List and, whilst recent survey estimates show that wild giant panda populations are increasing, there is still a long way to go to ensure the future survival of this iconic species. Conservation charity the Royal Zoological Society of Scotland (RZSS) is currently facilitating 40 giant panda-related research projects worldwide, through funding, part-funding and collaborations. RZSS’s experts are also currently working with nine universities across the UK. In 2013, RZSS gathered over 60 world-leading experts for a Giant Panda Symposium, where a five-year research plan for giant pandas was developed, with the aim of saving this species from extinction.