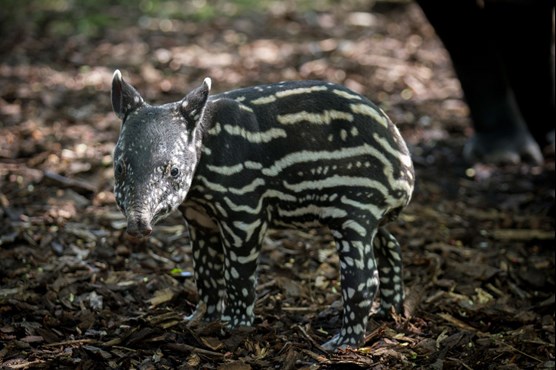 RZSS Edinburgh Zoo has welcomed the arrival of an endangered Malayan tapir calf. The spotty and striped young male was born in the evening of Thursday 19 May to mother Sayang and father Mowgli.

The tiny calf was born weighing 11kg (24 lbs), but will likely double in size in the next few weeks, eventually growing up to weigh as much as 250kg to 320kg (550 lbs to 700 lbs). Malayan tapir calves are born with brown fur and white stripes and dots, which provides camouflage in the forest. After a few months, Malayan tapir youngsters start to lose their stripes and spots and, by six months of age, they look like miniature adults, with stocky black bodies and white or grey midsections.

Karen Stiven, Hoofstock Keeper at RZSS Edinburgh Zoo, said: “The tiny calf is doing very well and, whilst he is staying close to his mother, he has been rambling around a bit on his small shaky legs to explore his surroundings. On Monday afternoon he took his first tentative steps into the outdoor paddock and was even brave enough to take a few splashes in the pond. 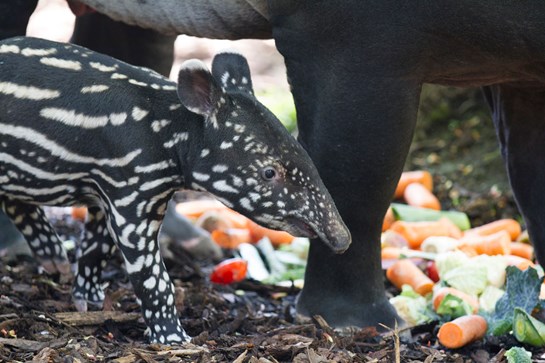 “The birth of this calf is very significant as he will go on to play a role in the conservation of this rare species as, once he is old enough, he will join the European Endangered Species Breeding Programme to help augment a safety-net population for this species, ensuring they do not go extinct. RZSS Edinburgh Zoo has had great husbandry success with this increasingly threatened tapir species.”

The Malayan tapir, also known as the Asian tapir, is the largest of four tapir species and is the only Old World tapir. Native to the rainforests of Burma, Malaysia, Sumatra and Thailand, tapir’s noses and upper lips are extended to form a prehensile proboscis, which they use to grab leaves. Tapirs normally measure 1.8 to 2.5m (6 to 8 feet) in length, with a shoulder height of 0.9 to 1.1m. (3 to 3.5 feet). Female tapirs have a long gestation period of 13 months before giving birth to a single calf. 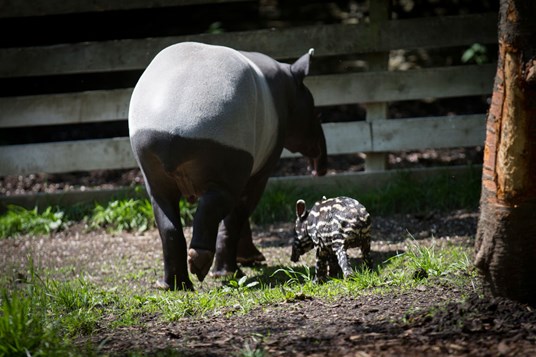 Listed as endangered on the IUCN Red List, the Malayan tapir is increasingly threatened with population numbers continuing to decline as a result of habitat loss and fragmentation as well as increasing hunting pressure. The population has been estimated to have declined by more than 50% in the last three generations (36 years) primarily as a result of tapir habitat being converted into palm oil plantations.