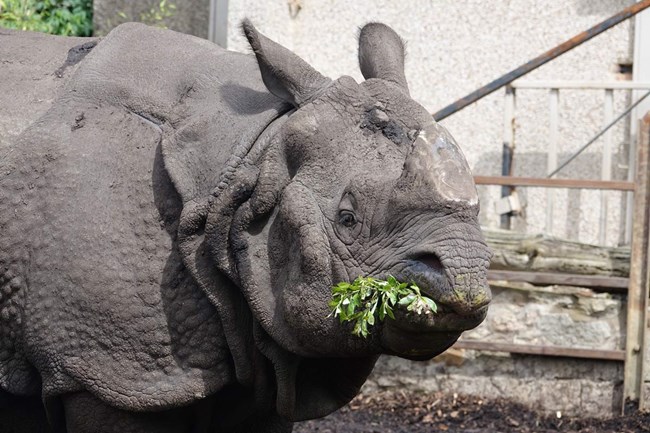 Above: Bertus left Edinburgh Zoo in May as part of the European breeding programme.

May has been a bitter sweet month for us all at Edinburgh Zoo as we waved farewell to Bertus, the greater one-horned rhino, as he went off to play his part in the European breeding programme (EEP).

RZSS Edinburgh Zoo has an important role in the EEP for the Greater one-horned rhino.  In the wild young male rhinos are solitary when they leave their mothers. As males take longer to reach maturity than females, there is a need to keep young males separately in the breeding programme until they are of age to be paired with a female. That is where we come in.  Whilst with us, ‘teenage’ rhino boys are put through their paces and spend a lot of time being trained, which is very important element in being able to provide the best level of husbandry for these animals. The training is conducted by our keepers and veterinary teams and teaches the rhinos to lift their feet, accept injections and allow regular body checks. With an animal the size of a rhino you don’t want to have to anaesthetise for every little ache or pain, so training the rhinos to cooperate in their own healthcare is a great investment in their future. 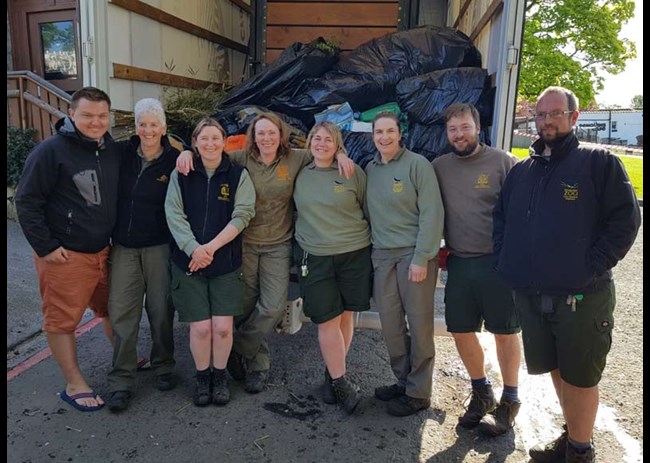 Above: Members of the RZSS Edinburgh Zoo hoofstock keeper section preparing to say farewell to Bertus.

Whilst we are proud of the part we are playing in the conservation of this species, it is always difficult to say goodbye, especially to an animal that has become such a firm favourite with keepers and visitors.

Bertus arrived at the Zoo in 2010, joining another young rhino called Samir. They bonded almost immediately and you could often find the pair snoozing in their big heated bathtub indoors or gallivanting around their outdoor enclosure. The two boys were an instant hit with visitors, with the rhino talk being one of the busiest of the day. 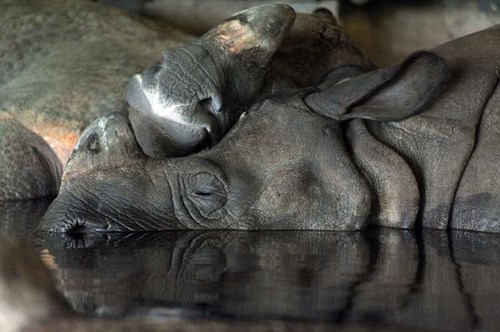 Above: Bertus and Samir enjoying a dip in the their heated pool at RZSS Edinburgh Zoo.

Bertus was affectionately nicknamed ‘bumpy bottom’ due to his particularly lumpy behind, and his mischievous nature is well known to our keepers, volunteers and regular visitors. During his time at the Zoo he seemed to love flooding the rhino house by rolling around in his bathtub on a busy Saturday afternoon. Another of his favourite pastimes involved running head on towards the viewing platform and stopping just a few metres before, splattering visitors with water and mud!

In 2014, Bertus and Samir’s fame spread beyond the Zoo as they appeared in a television advert for Clydesdale Bank which featured them enjoying a scrub down in their big bathtub by senior keeper Karen Stiven. In 2016 Bertus made further headlines around the UK when the fire service was called in to help the veterinary team treat his toothache.

Despite their strong bond, Samir was the bossier of the two, and after he left to be paired with a female in 2016 we saw Bertus really come into his own. He grew in both size and confidence and loved nothing more than having the attention on him.

The quiet moments with Bertus are often the most special. His ears always quick to prick up on hearing ‘Good morning handsome!’ following which he would run over to meet the keepers first thing each morning.

Ahead of his departure, the team at the Zoo had been conducting training with Bertus over several months to get him used to his crate. A special crane was brought in to lift Bertus onto the back of a transport lorry, which would take him on the first part of his journey to Luxembourg cargo airport. Senior keeper Karen joined him there for the flight to Surabaya in Indonesia, and helped to keep him calm and provide plenty of his favourite bamboo. For the final leg of the journey, Bertus was treated as if he was a celebrity, and joined by a police escort on the road to Batu Secret Zoo. 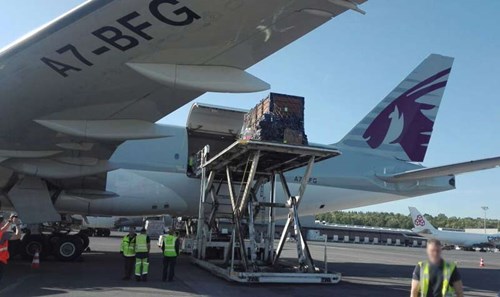 Above: Bertus on his way to Indonesia

Below: Settling into the indoor section of his new home - with lots of his favourite bamboo! 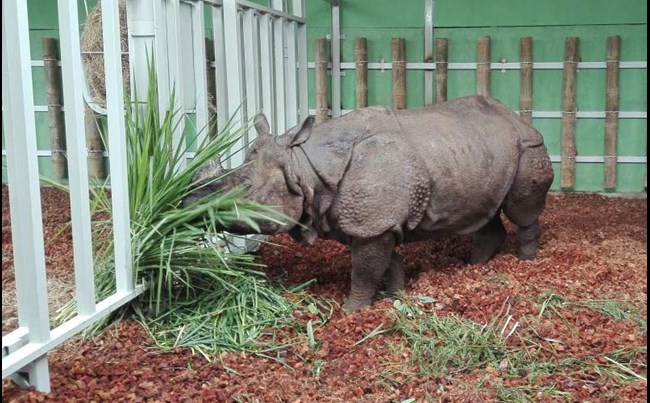 At first Bertus displayed a little 'rhino jet lag' and took his time coming out of his crate, but then quickly started to explore his new surroundings and started eating straight away. For the first few days he was kept in his indoor enclosure with his favourite tyre that had come over with him, then once the team were comfortable that he had settled well he was let out into his holding pen to start getting used to his new routine and keepers. Daily updates between the Zoo's since Karen left, have shown Bertus to be enjoying his large new enclosure and mixing well with the deer and antelope.

Our first pair of one-horned rhinos at Edinburgh Zoo, Baabuu and Fanindra, arrived with us in 2006 when they were about 2 years old. They left in 2010 to be paired with females and have both successfully reproduced in the years since. We hope for the same success for Samir and Bertus in their new homes.

We all get a sense of pride working with such amazing animals. Knowing that we are helping to provide a safe home for vulnerable species like the greater one-horned rhinoceros is a big part of why we are here.

The departure of Bertus is by no means the end of the story at Edinburgh Zoo, we are taking the opportunity to do a bit of refurbishment work on the existing enclosure and are expecting the arrival of two new young boys to join our rhino boot camp very soon! 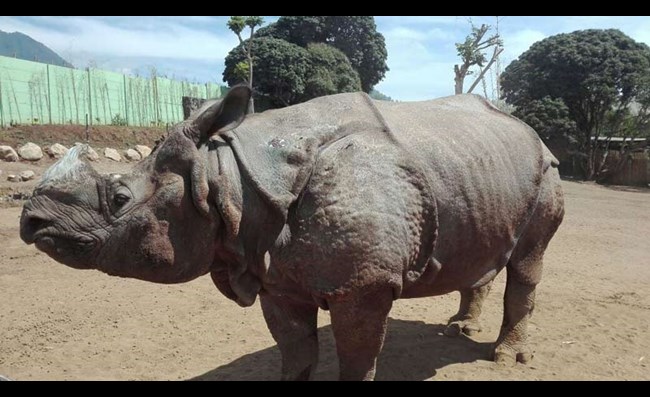