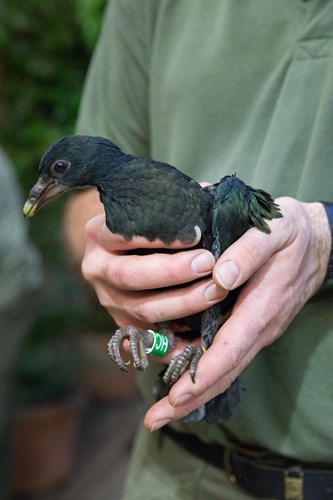 The chick hatched on 25 October and can be spotted in the Zoo’s Brilliant Birds walkthrough aviary.

The Nicobar pigeon is the closest living relative to the dodo and has extremely striking and colourful feathers. The large, mainly ground-dwelling birds feature brightly coloured feathers making it one of the more beautiful species among the pigeons and dove.

Sean Meechan, Senior Animal Keeper at RZSS Edinburgh Zoo said: “We are really pleased to see that the chick is doing well. Both parents have been keeping a watchful eye and will continue tending to it until it fledges at around one month old. We have a while to wait before the chick starts to show off its adult colouration, when it will begin to develop the white tail and dark green iridescent feathers that the species is famous for.”

Nicobar pigeons are classified as Near Threatened on the IUCN Red List with the species declining in numbers. This is due to the many threats faced by Nicobar pigeon including hunting and trapping for food.

Despite having a wide distribution, from the Indian Nicobar Islands to Papua New Guinea, the Nicobar pigeon is generally scarce throughout its range. The species is most abundant on the smaller, less disturbed islands which are increasingly being cleared for plantations, severely reducing preferred breeding and foraging habitats for the unique species.