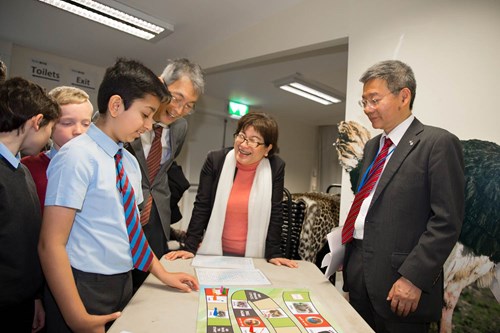 Attended by Mr Daisuke Matsunaga, the Consul General of Japan in Edinburgh, the day saw 98 pupils and 15 teachers from the local area take part in innovative science and language curriculum linked activities to learn about the conservation work RZSS is carrying out around the globe.

The pupils learned about the snow monkey (Japanese macaque), which is part of the RZSS collection, through a unique set of materials specifically designed to link to easy learning of the Japanese language. This is part of RZSS’s new initiative, Science in the Language Class.

“We are really excited to be hosting our first ever Japan Day. This initiative is one of the only of its kind and it builds upon the success of the Beyond the Panda education programme which already links the giant panda project with Mandarin language learning, the RZSS Education team aim to use this successful model to assist in learning different languages.”

Sponsored by the Japan Foundation, RZSS have produced a ‘Snow Monkey’ pack. This pack of games, jigsaws and activities is designed for cross curricular learning and for pupils to investigate and discover more about Japan, its culture, language, geography and wildlife.

The event was also attended by Ms Masayo Hasegawa, Deputy Director and Mr Makoto Netsu, Chief Japanese Language Advisor, from the Japan Foundation, London. Other special guests included Dr Yoko Matsumoto-Sturt from the University of Edinburgh and Ruta Noreika, from Blue Earth Works who played a role in the translations and development of the ‘Snow Monkey’ pack.

Mr Makoto Netsu, Chief Japanese Language Advisor for the Japan Foundation said: “The Japan Foundation is very excited to help support RZSS in delivering this fantastic initiative which gives pupils the opportunity to engage with Japanese culture and language in a new and innovative way.”

Mr Daisuke Matsunaga, the Consul General of Japan in Edinburgh said: “I sincerely hope that the children had a really good day at the zoo.  Children love animals and so do I.  The RZSS Education team have come up with an excellent idea that combines love of animals with love of languages.  May lots of children become interested in learning the Japanese language through this exercise and broaden their horizons through the understanding of different cultures!”

For more information on RZSS conservation projects across the world please visit http://www.rzss.org.uk/conservation/