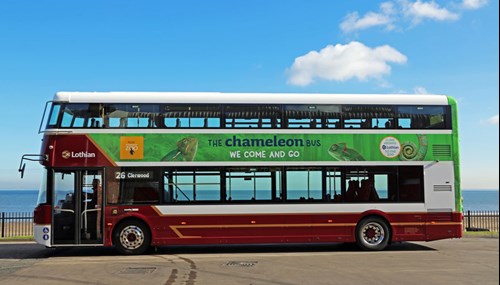 The Number 26 route includes St John’s Road in Corstorphine, one of Edinburgh’s busiest roads which was once hailed as the ‘most polluted road in Scotland’. The new buses reflect both organisations’ desire to tackle this issue head on, reducing CO2 emissions by 25% compared to the existing fleet and taking cars off the road. They will be instantly recognisable as they will feature huge pictures of the Zoo’s animals, the first being the spectacular natal dwarf chameleon, which can be seen in the Zoo’s brand new ‘Wee Beasties’ exhibit.

The 26 service connects communities from the west of the city as far as Musselburgh in  East Lothian which covers two of Edinburgh’s air quality management zones in Musselburgh High Street and St Johns Road. Service 26 is now well known by customers and drivers as the “Zoo bus” as every year it drops thousands of passengers at the entrance of RZSS Edinburgh Zoo. 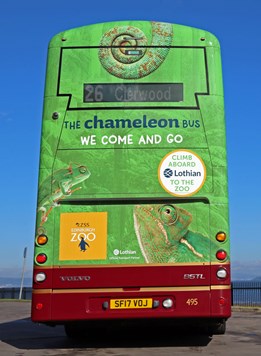 Barbara Smith, Chief Executive at RZSS Edinburgh Zoo, said: “The Number 26 is immediately recognisable to locals as the ‘Zoo bus’, so it’s fitting that we should welcome the greenest fleet in the city with the launch of our new chameleon bus. We have worked in partnership with Lothian for many years now and with the announcement of 30 new Zoo buses being deployed onto the route, our collaboration continues to go from strength to strength.”

Gaynor Marshall, Communications Director at Lothian, said: “We are delighted to extend our partnership with RZSS Edinburgh Zoo for a further three years. Historically the service 26 has been referred to as the ‘Zoo bus’ by residents and visitors to Edinburgh and its great that we are able to continue this tradition by transforming our fleet of 30 new low emission buses into zoo animals, capturing the imaginations of a raft of our customers. Lothian is fully committed to reducing the impact of transport on the environment and the introduction of these new vehicles will ensure we are continuing to improve air quality across the city.”

Lothian’s environmental programme began in 2011 and has so far seen over £55.5 million invested in hybrid and Euro 6 vehicles, with support from the Scottish Government’s Green Bus Fund. It currently has 105 hybrid vehicles and with the latest deliveries, will have 232 Euro 6 buses.

The Euro 6 Volvo double deckers, with Wrightbus Gemini 3 bodies, will reduce nitrous oxides by up to 98% and particulates by around 75%, compared with the existing fleet. The custom-built specification for Lothian features USB charging points, high-back seats, increased glazing for visibility, media screens and other bespoke features all designed to enhance and improve the customer experience.

The new Euro 6 diesel vehicles operate on Service 26. Lothian aims to convert all buses on this route to Euro 6 by the end of 2018, providing residents and commuters with the greenest bus fleet in the city. The service also travels through air quality management zones in Princes Street and Musselburgh High Street.

The natal dwarf chameleon can change its skin colour to blend in with surroundings and can move each eye independently, allowing it to look in two different directions at once. A native of South America, the species is classified as vulnerable on the IUCN Red List, with numbers continuing to decline year on year as a result of the international pet trade and overall loss of habitat.

One of Scotland’s leading conservation charities, RZSS works both here in Scotland and in over 20 countries around the world, connecting people with nature and safeguarding threatened species. Its projects range from reintroducing the Eurasian beaver to Scotland and protecting the endangered Scottish wildcat, to studying the mysterious giant armadillo in the Brazilian Pantanal and safeguarding chimpanzees in the Budongo Forest, Uganda.