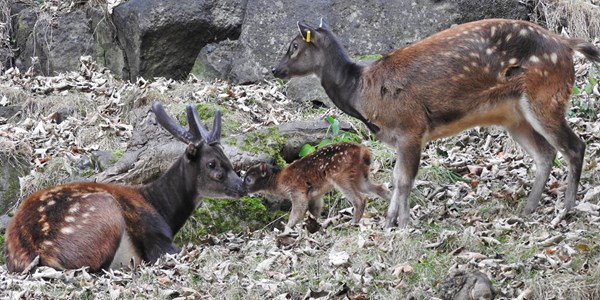 Keepers at RZSS Edinburgh Zoo are delighted to welcome the birth of a rare calf. A Visayan spotted deer calf was born over the weekend and it is the first time this species has bred at the Zoo.

The Visayan spotted deer, also known as the Philippine spotted deer, is a rare deer species, listed as Endangered on the IUCN Red List. This species of deer is believed to be one of the rarest and most narrowly distributed mammals in the world. Found only on the Western Visayan Islands of the central Philippines, this species is considered to be quite rare throughout its limited range. 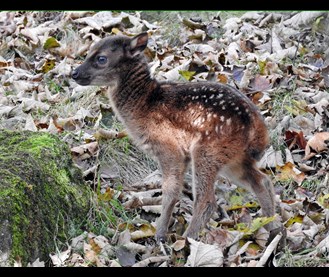 Jo Elliott, Animal Collections Manager at RZSS Edinburgh Zoo, said: “The young calf is doing very well and is already able to keep up with its parents. The young female calf has yet to be named by keepers, but she is already stealing visitors’ hearts with her large, blue eyes. She has quite a woolly coat and her white spots are already very prominent.

“This is the first Visayan deer calf to be born at the Zoo, so we are extremely happy. The birth of this deer will play an important role in the conservation of this increasingly threatened species, helping to safeguard it from complete extinction.”

Wild populations of Visayan spotted deer are fragmented in their limited habitat, with population numbers continuing to decline. The main threats to this species are hunting and the loss of habitat due to land being increasingly used for agriculture and deforestation. This species is managed through the European Endangered Species Programme and European Stud book Programme. They are quite short-legged deer with adults only reaching 80cm in height and around 80kg in weight.

The Visayan spotted deer can be found at RZSS Edinburgh Zoo, between the Visayan warty pigs and the swamp wallabies.