Despite giraffes being the tallest and one of the most loved animals in the world, the story of their decline is a silent one. The forgotten giant.

In 2021, the Royal Zoological Society of Scotland (RZSS) partnered with the Giraffe Conservation Foundation (GCF) and Glenmorangie Single Malt Scotch Whisky to bring giraffes back to Edinburgh Zoo for the first time in over 15 years and support vital work to protect the species in the wild.

GCF is the only organisation in the world that concentrates solely on the conservation and management of giraffe in the wild throughout Africa.

Extinct in at least seven African countries, giraffe numbers have declined throughout their range in the last century. However, GCF is standing tall for these iconic animals and their combined efforts with governments, NGOs, conservationists, zoos and other stakeholders are inspiring conservation efforts. The future of giraffe conservation and management must be a team effort based on strong partnerships and pro-active actions. Today, GCF supports giraffe conservation efforts in over 100 million acres of giraffe habitat throughout Africa and has already re-introduced giraffe and augmented populations in over 10 million acres of quality habitat.

Join us at Edinburgh Zoo on Friday 16 September to hear Stephanie and Julian Fennessy talk about the plight of giraffes and the conservation successes of GCF, an organisation at the forefront of giraffe conservation and management in Africa. It has never been more important to stand tall and stick our necks out to save giraffes before it is too late.

Julian Fennessy is a highly entertaining speaker and has a wealth of incredible stories to share about these wonderful animals. His urgent and daring mission to move a threatened population of giraffes across the Nile to their new home was brought to our screens in David Attenborough’s award-winning BBC documentary.  With many more stories like this, you are in for a treat!

Julian is joining us in Edinburgh from his home in Namibia, where he founded the world’s first and only conservation charity for giraffes – the Giraffe Conservation Foundation. GCF is the only organisation in the world that focuses solely on the conservation and management of giraffes in the wild throughout Africa and currently implements and supports giraffe conservation projects in 17 African countries. Together with his wife Stephanie, Julian's single-minded passion for these gentle giants is helping to save giraffes across Africa from extinction.

Join Stephanie and Julian for an inspiring presentation on giraffe conservation and their work. The couple has more than forty years of collective experience in conservation and sustainable development in Africa and Australia including wildlife management, environmental consulting, community conservation and land management. 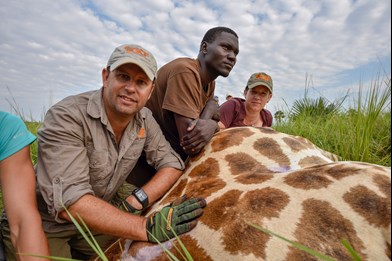 As well as supporting RZSS and GCF’s giraffe conservation work, Glenmorangie are the Presenting Partner for Giraffe About Town, the public art trail across Edinburgh working to raise vital funds for RZSS’s wildlife conservation projects in Scotland and around the world.

The talk begins at 6:30pm with arrival from 5:30pm and will take place in the Budongo Lecture Theatre at Edinburgh Zoo. Teas and coffees will be available on arrival, for further information please contact events@rzss.org.uk

Please note, entry for this evening event will be through the members gate at the top left of the zoo car park. Attendees can park their car in the zoo car park for £2 for the duration of the event. Please keep a hold of your ticket and a member of staff will validate this for you. If you are an RZSS member car parking will be free for this event.

(Plus booking fees for all of the above)

Animal Adoption is a great way to support RZSS, treat yourself or buy as a gift for the animal lover in your life!