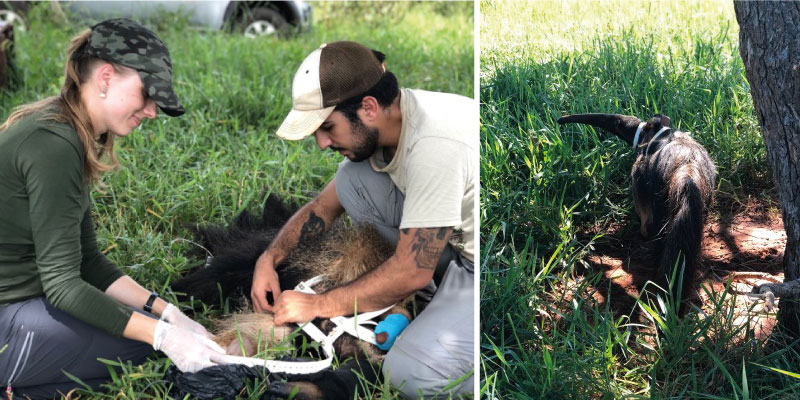 Above: Camila & Gabriel from the Anteaters & Highways Project team fit a radio collar to a giant anteater.

In the months since our last update, we have been busy continuing our work in the Pantanal and Cerrado, making good progress across our existing projects. I look forward to updating you on this work in in due course, however it is an exciting new initiative that i'm eager to update you on in this blog.

In May we started a project in partnership with TamanduASAS in the State of Minas Gerais. The aim of this project is to help rehabilitate orphaned giant anteaters, most of which have lost parents through road collisions. The TamanduASAS Project has been nursing and rehabilitating young anteaters for some time but they needed a partner to help with the release and monitoring of individuals once they were considered ready to be returned to the wild. Our experience of monitoring this species, coupled with the fact we are already active in the regions where these animals will be released, made the Anteaters & Highways team an obvious fit.

The problem of orphaned anteaters is an important animal welfare issue and a tragic by-product of the vast road networks on native wildlife. We hope that we can bring back lessons learned from this experience back to Mato Grosso do Sul. This is a long term partnership and we are very excited to see how it unfolds.

Below: Orphaned giant anteaters in the TamanduASAS rehabilitation centre 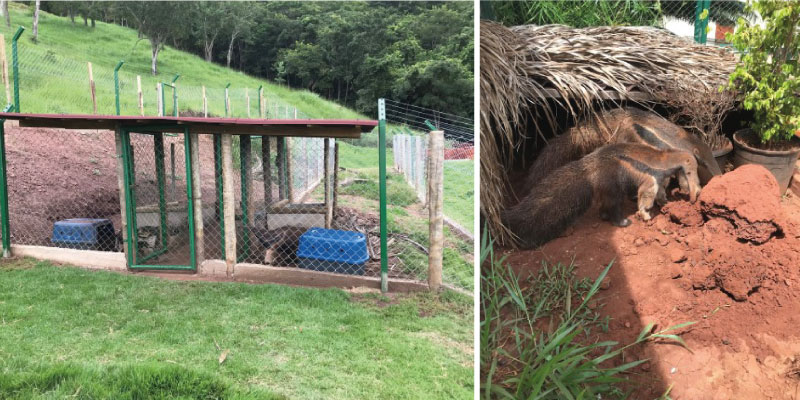 Three youngsters were part of the first release, each with there own story to tell.

Dumbo arrived with the TamanduASAS team on the 29 May 2018 weighing only 1,240kg. Local residents found him alone vocalising very loudly in the urban area of Uberlandia (near the City’s water treatment plant). His first night alone without his mother was very difficult and he suffered a lot of hair loss due to stress. Slowly he has been nursed back to health through a combination of patience, many bottles of milk and plenty of TLC. Dumbo is a real scaredy cat! He has a very gentle nature and not at all aggressive. It took him a very long time to leave his blankets to start exploring his habitat. The smallest noise would make him run for cover. With time, Dumbo adapted well his weaning became easier. He is actually now a real glutton! Sometimes he even lays down while eating to be closer to his food. Dumbo is currently considered the most cleanliest of all the rescued anteaters. He loves to bathe in his pool at any time of the day. In fact the first time that he came into his new rehabilitation enclosure at the Retiro Águas Vivas ranch in March 2019 the first thing he did was go into one of the pools!

Below: Dumbo on arrival at Project TamanduASAS 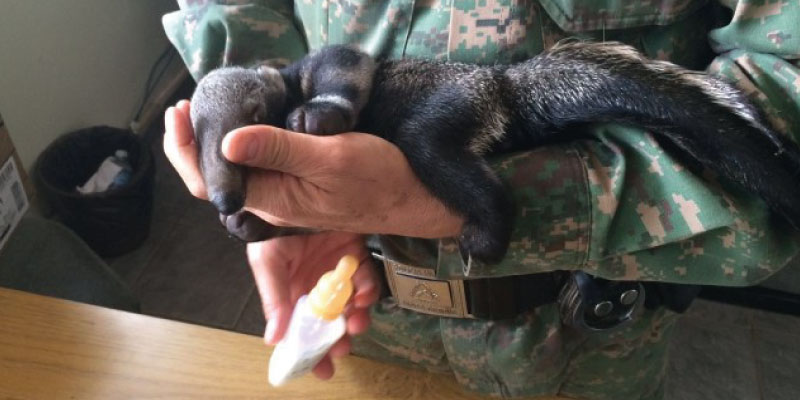 Arya was found as a tiny pup on a road in the  rural municipality of Uberlândia and was taken to the veterinary hospital in the local university. The veterinarians soon realized that the animal required a lot of specialized care and Arya was rehomed with the TamanduASAS project in January 2018. She is a very active and smart giant anteater. She rapidly explored her whole enclosure and quickly destroys all the enrichment items that are offered (including the camera traps that we installed to observe her !).

Below: Orphaned anteaters at the TamanduASAS centre (right) 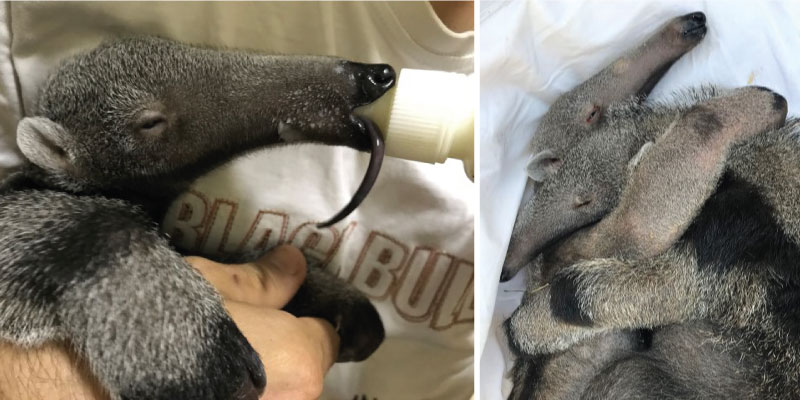 Capitu was brought to the veterinary hospital of the federal university of Uberlandia in July 2017. He was supposed to be released without going through a rehabilitation center in December 2018. However, he had become too tame to be simply released and for this reason the environmental police asked the TamanduASAS for help. The TamanduASAS project took him to their rehabilitation enclosure in Tupaciguara. During his time with the project, he has quickly learned to sleep amongst the vegetation and has now stopped seeking human interaction. 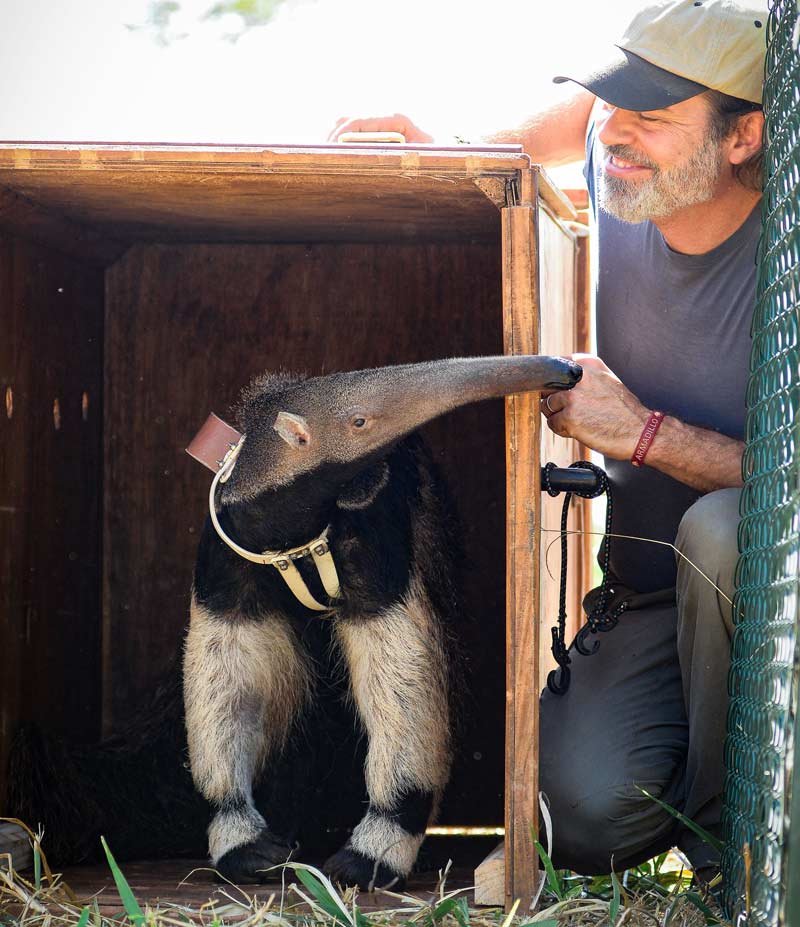 Above: Dr Arnaud Desbiez releasing 'Dumbo' back into his native habitat - photo by Aurelio Gomez

On 10 June 2019, all three were released back into their natural habitat. Their enclosures were left open through the night and the next day, through telemetry tracking their radio collars, they were all located in nearby wooded areas. Monitoring will continue daily at first, then weekly, before a final health check at around 6 months. This is such a worthwhile and enjoyable addition to our existing work and I look forward to keeping you updated about this project throughout the year.

Below: The Anteaters & Highways Project Team 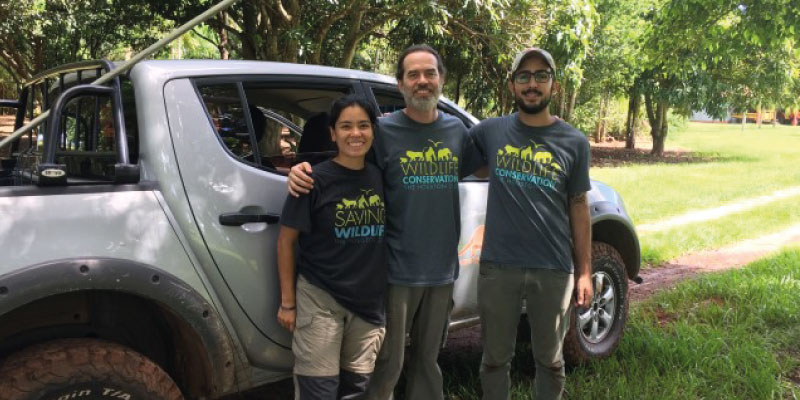 As always I want to end this update by thanking you all so much for your support. As you can see the program and projects are always expanding and through new partnerships, research questions and conservation actions we are always improving. We couldn't do any of this without your long term commitment and support. Thank you so much!

We would like to thank the players of People’s Postcode Lottery for their generous support which has helped this project.