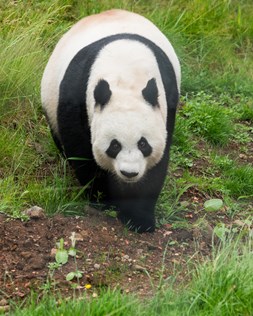 Tian Tian had her annual health check this morning and was artificially inseminated under expert veterinary care.

We are pleased to say that all went well, though it is too early to know if she is pregnant at this very early stage.

Tian Tian gave birth once before in 2007 and it really would be incredible for her to experience being a mother again. We will all be keeping our fingers crossed.

We know lots of you have questions about giant panda breeding and the species’ future at Edinburgh Zoo. Please do read the FAQs below for the latest information.

Yes, Tian Tian is in good health. The artificial insemination procedure is very similar to what humans go through during IVF treatment and is carried out under expert veterinary care, with Tian Tian’s welfare being our top priority.

It is important to give the animals in our care opportunities to go through pregnancy and parenthood as these are natural behaviours.

Why did you artificially inseminate Tian Tian instead of allowing her to mate naturally?

Yang Guang, our male giant panda, had both testicles removed in November 2018 due to the presence of tumours.

As well as being important for the international giant panda breeding programme, giving Tian Tian the opportunity to go through pregnancy and parenthood provides her with a vital opportunity to express natural behaviours and would be fantastic for her overall welfare.

The artificial insemination (AI) procedure is very similar to what humans go through during IVF treatment and is carried out under expert veterinary care.

Who would be the dad?

A panda from the China Conservation and Research Center for the Giant Panda (CCRCGP) named Hualong. He was selected by our colleagues in Wolong as a good genetic match for Tian Tian.

Giant panda cubs are raised by their mothers and it would be rare for them to come into contact with their fathers in the wild. Outside of raising cubs, they are naturally solitary animals which is why Tian Tian and Yang Guang live apart at the zoo.

Why wouldn’t Yang Guang be the dad?

Yang Guang, our male giant panda, had both testicles removed in November 2018 due to the presence of tumours.

Why are you trying to breed giant pandas?

As well as being an important opportunity for Tian Tian to experience pregnancy and being a mother, this is also a critical part of the international giant panda breeding programme.

While positive developments for giant pandas in recent years include their IUCN status changing from endangered to vulnerable, there are fewer than 2,000 giant pandas left in the wild and their habitat is in decline. Conservation efforts for the species include releasing captive-bred pandas into their native range and there is a possibility that Tian Tian’s cub’s future offspring could join them in the future.

Giant panda breeding is an incredibly complex, unpredictable process and we have learned a huge amount over the past nine years and seven artificial insemination processes. This has been really valuable as part of wider scientific research and conservation efforts.

When will you know if she is pregnant?

We will only know for certain that Tian Tian is pregnant if she gives birth later this year.

There is no definitive panda pregnancy test and giant pandas can delay implantation of fertilized eggs as well as having pseudopregnancies which mimic real pregnancies, all of which makes it very difficult to predict if and when they may give birth.

When would the cub be born?

Most giant panda cubs are born in August or September. As bears can can delay implantation of fertilized eggs, and have pseudopregnancies which mimic real pregnancies, there is no way to be sure of an exact timeline.

Will Yang Guang and Tian Tian be going back to China in December when the contract ends or will it be extended?

It is too soon to say what may happen when the contract ends at the end of the year. We are in discussions with our colleagues in China and will update everyone as soon as possible.

Will the agreement be extended if Tian Tian has a cub?

We would need to discuss details with our colleagues in China, though Tian Tian at the very least would need to stay to raise any cubs until they were old enough to travel.

Why do you pay to have the pandas at Edinburgh Zoo and how much does it cost to take care of them?

Caring for Tian Tian and Yang Guang costs our charity £35,000 each month. In addition, the agreement includes an annual payment of $1 million. This is often referred to as a loan payment when in fact this donation supports giant panda conservation, welfare and research in China.

Like all the animals in our care, our pandas play a critically important role in attracting and engaging hundreds of thousands of visitors each year so they can learn about the threats animals face in the wild and the action they can take to help. Their power to connect with people with nature and encourage behaviour change is invaluable.

Each visit to Edinburgh Zoo also supports conservation, research and education here in Scotland and around the world. You can help care for our animals and protect wildlife around the world by visiting our parks, joining RZSS as a member, adopting your favourite species and much more.

Find out more at edinburghzoo.org.uk/help