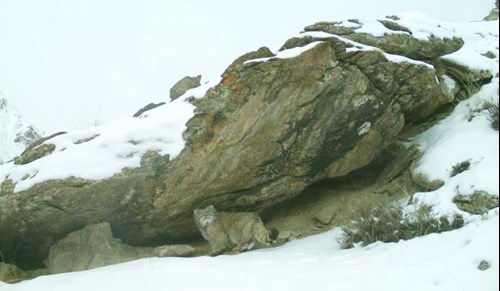 As many of you will know, Scottish wildcat conservation, through our partnership with Scottish Wildcat Action, is a very important project for RZSS. Our work with this species has taken us all over Scotland, with most of the field-based activities taking place in the harsh winter conditions of the Scottish Highlands. Our commitment to cat conservation however, goes beyond our native wildcats, as we also co-manage and support other projects across the globe.

One such initiative is the Pallas’s cat International Conservation Alliance (PICA). Like Scottish wildcats, the Pallas’s cat is also adapted to harsh climatic conditions but with one major difference. Pallas’s cats, along with their larger cousin the snow leopard whom they share most of their range with, live at some of the highest elevations of any cat species in the world. Images of Pallas’s cat have been captured as high as 5,000 meters above sea level, so it goes without saying that if you are planning to study the species in the wild, you need to prepare for some challenging conditions.

Above: Our expedition vehicle
Below: Camping at 3,700m above sea level

In September 2018, I was joined by colleagues from Nordens Ark and Snow Leopard Trust on an expedition to the remote Tien Shan mountains of Kyrgyzstan. The aim of the trip was to undertake a camera trapping project that would see us test olfactory (scent) lures against auditory (vocal) lures as a means of improving camera trapping success. This approach had only previously been tested in captive environments by PICA supported MSc students.

After arriving in the capital city of Bishkek, where we gave a short presentation during the Conservation Asia conference, we started the 12-hour drive south east to the field site next to the Sarychat Nature Reserve. This journey took us through some of the most incredible landscape the country has to offer and past the famous giant lake of Issyk-Kul. At 182km long it is fair to say that lake Issyk-Kul is a national feature of Kyrgyzstan. After a short break in the hot (28oc) weather next to the lake, we journeyed up towards the high mountain pass before descending to the study site. As we climbed higher up the mountain, the climate changed quickly. By the time we reached the mountain pass at 4,020 meters, marked by snow leopard and Argali statues looming down from the rocks above, the temperature was 0oc with snow falling all around us. We had to quickly adjust to the drop-in temperature and the lack of oxygen, which at over 4,000m can take some getting used to. 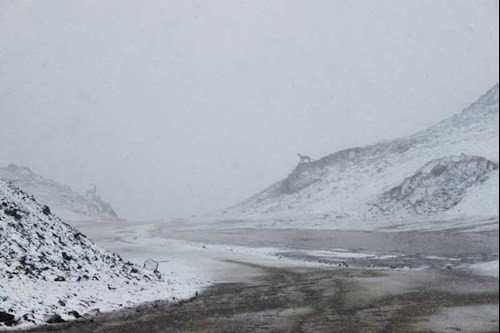 Above: Mountain pass at 4,020m marked by snow leopard and Argali statues
Below: The PICA team preparing the field equipment

As we descended back down the mountain toward the remote herder camp of Ak-Shyrak, at a slightly more manageable altitude of 3,700m, we were welcomed by a mountainside filled with marmots. Watching their heads bobbing in and out of burrows as they tried to determine if we were a threat or not was certainly quite amusing.

We finally arrived at the camp as darkness fell and a good night's sleep prepared us for the field work ahead. During breakfast the following day while we planned our activities, the conversation quickly turned to our mode of transport out to the study site, approximately 3 hrs from the herder camp. With the vehicle restricted to the driver and the equipment due to the lack of vehicle tracks and rocky mountain conditions, it was clear we would need another option. It goes without saying that my nerves increased when I looked out and saw one of the local herders arrive with three horses, given that I have never ridden a horse before. When in Rome, as they say…

After providing the herders with some entertainment, as they watched my 6’3 frame clamber onto one of the horses, we started out on the 3 hour trek along the mountain trail towards the study site. With the high mountain tops of the Tian Shan mountains in front of us and a variety of eagles and vultures flying above our heads, it was clear that it really wasn’t the worst place to have my first horse riding lesson.

We arrived at the study site in time for lunch and as our Kyrgyz colleagues prepared some food, we set the tents and prepared the cameras and lure devices ready for deployment.

Above: Find the best location for camera trap placement

In order to provide a true comparison between the lures and the control cameras, we designed a large grid approximately 1km wide by 5km long where we positioned camera traps every 500m. Working under 'normal' environmental conditions, this setup wouldn’t create too many issues, however when combined with the daytime temperatures of 25oc and the lack of oxygen, it felt like everything we did was a challenge.

During the course of the trip, we placed all 30 cameras and lures, identified and recorded species seen, photographed the range of habitat and features around the study site and took the rare opportunity of scanning the mountainsides on the off chance of glimpsing a Pallas’s cat or snow leopard. Unsurprisingly, we didn’t manage a glimpse of a snow leopard or Pallas’s cat, but just spending time in their native habitat, knowing that they were there, was an incredible experience on its own.

All good things however do come to an end and after several days in the field, we had to accept that our time was up. We packed up the equipment, took some final images of the campsite and mountain tops and then headed back to the herder camp. As the local herders greeted us, always with a handshake first, we took the opportunity to have one final conversation before the long drive home. Over tea, bread and jams, which were always generously offered, the herders shared their own incredible experiences of seeing snow leopards and Pallas’s cats in the wild. Something few people in the world have the privilege of experiencing. As a means of thanking them, and to improve the local children's knowledge of Pallas’s cats, we left several PICA educational packs that we had previously translated into Kyrgyz. With a final wave goodbye, we were once again back travelling through the mountains. 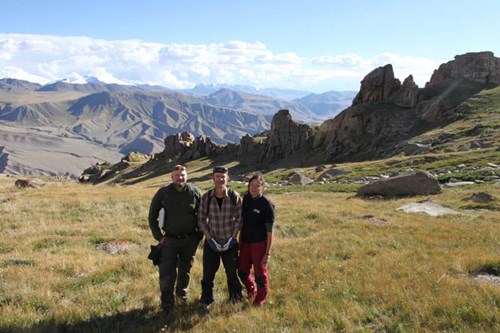 Above: The PICA team!

As we drove back through the high mountain pass, and as a reminder of the harsh conditions we were in, our Kyrgyz colleague spotted a lone black sheep on the plateau. He remarked that it must have somehow separated itself from the herder’s flock and could now be easily picked off by eagles or wolves if not found. Given the value of livestock to herders in these remote areas, we were naturally glad to see the herder on his horse several miles down the track. With a handshake first, a quick conversation in Kyrgyz and then the passing of some more educational materials, the herder was off back up the track to find his lost sheep.

On the way back to the hotel in Bishkek, we stopped off in another small mountain village where we met with a local school teacher, herders and some local children all slightly bemused to meet Scottish and Swedish people. However this short visit gave us new information on Pallas’s cat sightings and surprisingly allowed us to collect a genetic sample from a Pallas’s cat skin. After distributing more educational packs and taking the obligatory group photographs, we continued our journey back to Bishkek.

Above: Herder interviews and distribution of education material were important tasks

While relaxing in the hotel before catching our flights back home, we had the chance to reflect on what will likely be a once in a lifetime experience.

It goes without saying that Kyrgyzstan is a hidden gem of central Asia and with its stunning landscapes, incredible wildlife and welcoming communities, it is a country that I heartily recommend to all.

Now we eagerly await the retrieval of the cameras by our Kyrgyz colleague who we will meet again in Sweden during the upcoming Global Pallas’s cat conference hosted by Nordens Ark, PICA and the IUCN Cat Specialist Group. We are hopeful that we have been successful in capturing images of Pallas’s cat with this project and in highlighting the potential benefits of using vocal lures to improve camera trapping studies.

Like all activities with PICA, we look forward to sharing the results with you in the near future and keeping you well connected to the research and conservation efforts of this amazing little cat species from central Asia.