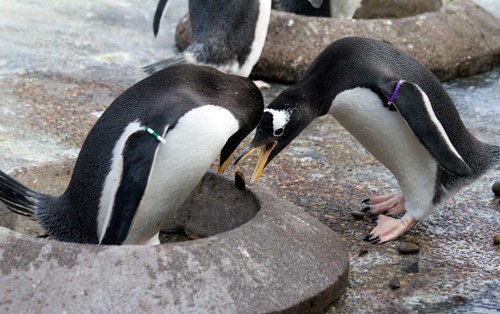 Whilst the world of modern dating can be complicated – whether to swipe left or right, where to go on your first date and so on – life for the gentoo penguins at RZSS Edinburgh Zoo is thankfully a lot simpler. A kind gesture with a pretty pebble goes a long way.

Spring is in the air and for the team at RZSS Edinburgh Zoo that means placing the penguin nest rings and pebbles into Penguins Rock to kick start the annual breeding season. It is a noisy and lively time at the Zoo, as the penguins dash towards a mound of perfectly smooth pebbles to find the perfect one to woo their mate with. 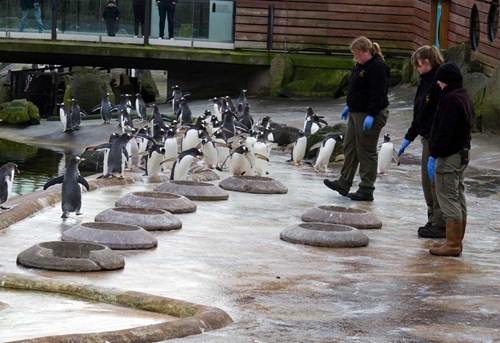 Choosing a pebble is much like choosing an engagement ring – it has to be perfect. The gentoo penguins are no exception and carefully select the prettiest and shiniest pebble to give to their mate. However, occasionally they may spot a better looking pebble in a neighbour’s nest and decide to take it for their own, causing a few ruffled feathers! 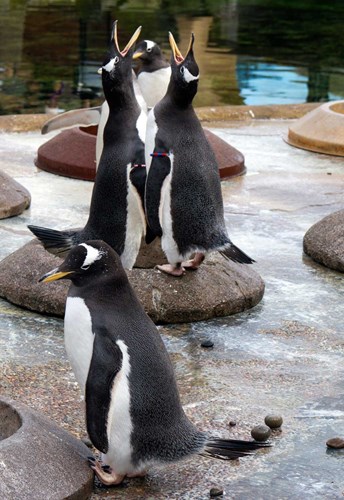 Dawn Nicoll, Senior Penguin Keeper at RZSS Edinburgh Zoo, said: “Penguin breeding season is one of our busiest times here at Edinburgh Zoo and one of the most exciting.

“After placing the nests and pebbles in Penguins Rock, it is fantastic to watch the gentoos pick out their favourite stone, find their mate and choose a nest together. It is quite common for gentoos to return to the same nest they have used year after year.”

Penguins typically court the same mate each breeding season but, contrary to popular belief, not all penguins mate for life. Same sex penguin partnerships are not uncommon and they tend to make great parents, as keepers will redistribute eggs from nests which have too many and give them to same-sex partnered penguins to rear.

After successfully finding a mate and filling the nest with shiny pebbles, the first eggs should start to appear in April, with the first chicks hatching in May after a 33 to 35-day incubation period. The penguin parents share the incubation and parenting duties and, when the chicks reach three to four months of age, they are old enough to leave the nest and join a large crèche with the other penguin chicks. Whilst in the crèche the young penguins will learn essential skills such as how to swim and feed. 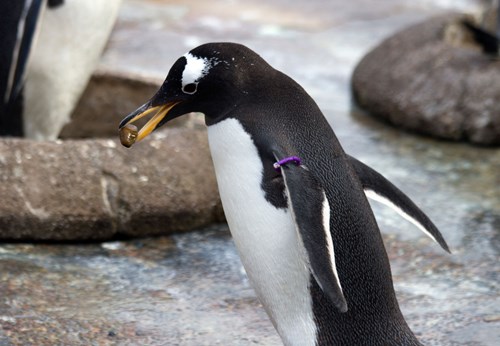 The RZSS Edinburgh Zoo penguin cam will be re-positioned onto the gentoo nesting site to allow fans to keep up to date with all the nesting activity. Viewers may see the penguins carrying pebbles and placing them in the centre of the nest, which creates a useful protective barrier for the eggs and future chicks. As an extra protection measure, some birds may be seen lying down and kicking out stones with their feet to create a crevice in the middle of the nest. You can watch all the gentoo nesting activity here: http://www.edinburghzoo.org.uk/webcams/penguin-cam/