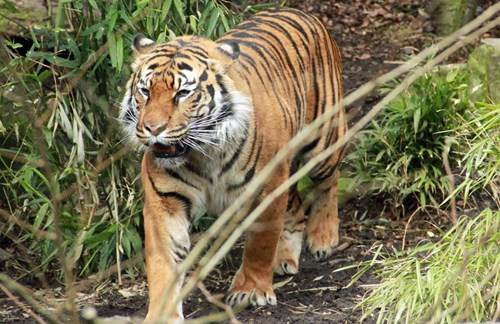 The Royal Zoological Society of Scotland (RZSS) is delighted to announce the development of a brand new and improved enclosure at RZSS Edinburgh Zoo for their pair of critically endangered Sumatran tigers.

“Tiger Tracks” will launch in June 2016 and will be the new home for Jambi and Baginda, the adult breeding pair that experts at the conservation charity hope will eventually go on to have cubs and increase the numbers of this extremely rare species.

The Sumatran tiger is a subspecies of tiger found only on the Indonesian island of Sumatra and it is estimated that fewer than 400 of these majestic tigers are left in the wild. Whilst these tigers are protected by law in Indonesia, increased deforestation and poaching has led to their significant decline and, without help, the Sumatran tiger faces the very real threat of extinction.

Tiger Tracks will be more than three times the size of the existing Sumatran tiger enclosure at RZSS Edinburgh Zoo and development will cost in the region of half a million pounds. It will feature a spectacular ground level viewing tunnel for visitors, covered pathways, a high level viewing area, feeding post and cubbing den. Tiger Tracks will also boast climbing structures for the tiger pair, heated rocks to relax on, ponds to splash in and a new indoor house.

Chris West, RZSS CEO, said: “We are delighted to be able to develop a new modern and dynamic Sumatran tiger enclosure with the needs of both our visitors and animals in mind. Part of the ongoing Big Cat Strategy of RZSS, we are extremely pleased to be able to create this tailor-made enclosure that truly delivers on welfare, breeding and visitor experience grounds. 97% of wild tigers have already died out in just over a century, so with the help of well-coordinated breeding programmes across the world – such as the European Breeding Programme of which we are a part – it is our hope that we will be able to increase a captive bred reserve population of this endangered species and protect them from a similar fate.”

Darren McGarry, Head of Living Collections at RZSS Edinburgh Zoo, said: “The enclosure will be as natural as possible and highly immersive. One of the key features of Tiger Tracks will be a glass viewing tunnel that will make visitors feel as if they have walked right into the enclosure itself and come face to face with a powerful Sumatran tiger. At ground level, the tunnel will include a climbing structure of trees overhead on which the tigers will walk. From an animal point of view, Tiger Tracks will be highly stimulating and well designed.”

The new enclosure will aim to tell the story of those living with carnivores and how human and wildlife conflict is one of the major issues facing wild animals today. Visually, Tiger Tracks will subtly reflect elements of an Indonesian tiger reserve in its design and as visitors explore this habitat they will discover just how close humans and tigers in the wild are living alongside each other.

Once completed, visitors will be able to find the new enclosure in the area just behind the current tiger enclosure. A new picnic and play area will also be developed to the north of Tiger Tracks, occupying part of the space vacated by last year’s Dinosaurs Return! exhibit. The play park and picnic area are scheduled to open to the public as soon as this Easter.

Last summer, keepers at RZSS Edinburgh Zoo started the complex process of introducing Jambi and Baginda to each other. Enclosure swaps started the slow process so that the big cats could become familiar with each other’s scents and introductions between the magnificent, rare pair have gone well. Male Jambi, aged 12, arrived at RZSS Edinburgh Zoo in July 2015 from Berlin. Female Baginda, also aged 12, arrived from Benidorm in May 2011.

The Sumatran tiger is the smallest of all the tiger subspecies and is distinguished by heavy black stripes on their orange coats. Their habitat ranges from lowland forest to mountain forest and includes evergreen, swamp and tropical rain forests.

Development on the new enclosure will start shortly and both tigers will remain on view in their current enclosure during the development.