We currently have one female East African crowned crane here at the zoo.

Location at the Zoo

She can be found in our African Aviary, which is located near the front of the zoo.

The East African crowned crane (Balearica regulorum gibbericeps) is also known as the crested crane and is a sub-species of the grey crowned crane. The East African sub-species can be found in the eastern areas of the Democratic Republic of Congo, Uganda and Kenya south through Tanzania to Mozambique. They live usually in marshes and grassy flatlands near the rivers and lakes and also inhabit cultivated land.

Standing over a metre tall, the large, elegant East African crowned crane can be seen in many wetland areas. It’s largely grey plumage contrasts sharply with black and white wings, a crest of golden feathers sitting on top of its head, and a bright red pouch that hangs from the throat. The head is black with large white cheek patches, while the neck is pale grey. Males tend to be slightly larger than females but are otherwise indistinguishable.

Their diet consists of plants, seed heads, grasses, grain, insects, frogs, worms, snakes, small fish and the eggs of water animals.  They stamp as they walk so insects are flushed out for the waiting crane to eat.

Crowned cranes nest in pairs, but often flock together and roost communally at night, sometimes building flocks of over 100.  During the breeding season the female lays between 2 to 3 eggs which both parents incubate for approximately four weeks.  Both parents feed the young until they leave the nest.

The main threat to crowned-crane populations is the loss of suitable wetland habitat, due to an increasing human population and the demand for agricultural land and freshwater sources 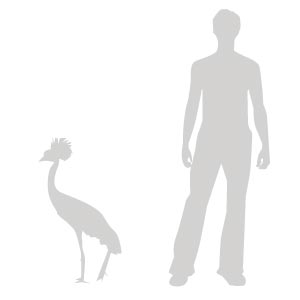