We have a small flock of Waldrapp ibis that can be found in the duck ponds at the bottom of the zoo. Look out for them sitting up in their nest boxes and performing courtship bows from March. The grey-headed youngsters begin fledging from the nests around May.

They can be found in the ibis enclosure near the red river hogs.

The waldrapp ibis are part of the European Endangered Species breeding programme.

Waldrapp ibis have a bare head and neck, which are red in colour apart from a black top. Blueish-purple feathers cover the rest of the body and are long and glossy with a metallic green tone. The upper wing-coverts are a glossy purple-red and the long curved beak is also red.

They are a social species normally foraging and nesting in large flocks, for lizards and beetles. Their nests are made from loose branches lined with grass and placed on the cliff ledge or cave. Females will lay two to four eggs per clutch.

This species has experienced a severe decline in numbers over the past 30 years, and wild Waldrapp ibis are still in a lot of trouble. The majority of wild birds are found in Morocco, where they have a degree of protection, and the population there appears to have stabilised. However, this species was once found right around the Mediterranean sea and up into the Alps. There are also tiny remnant populations in Turkey and Syria.

The reasons behind this decline are poorly understood. It is possible that in the past it has been as a result of natural causes, however in recent times this more likely to be linked to hunting and persecution, disturbance at the breeding sites, and the loss of suitable habitat. Pesticide poisoning has also had devastating consequences, especially in Turkey in the late 1950s, when hundreds were killed outright by DDT, a spray that was used to kill mosquitoes. 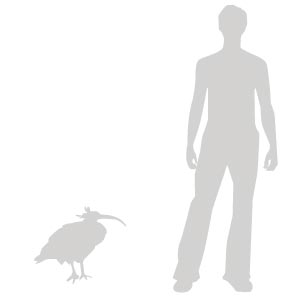