We have two snowy owls at Edinburgh Zoo.

The snowy owls can be seen in the aviary behind the banteng.

The size and remoteness of the snowy owl’s habitat make it difficult to accurately assess their population size. However, they are not currently considered globally threatened. Some individuals have been lost due to collisions with vehicles, powerlines and aircraft, others as a result of persecution and hunting. The species is harvested by native northern people for food, feathers and claws, but it is believed to have only a local impact. The potential effects of global climate change on the snowy owl and its Arctic habitats are not yet known.

The snowy owl is legally protected from shooting and trapping and in Europe it is protected under the Convention on the Conservation of European Wildlife and Natural Habitats (Bern Convention) and the EC Birds Directive. Policies being put in place to protect large bird species from electrocution on powerlines and from airplane strikes should also benefit this magnificent and distinctive Arctic bird. 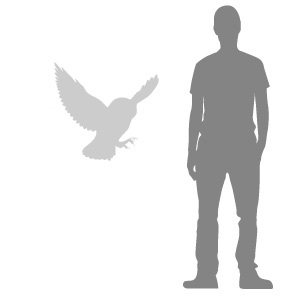 Snowy owls (Bubo scandiaca) are possibly one of the most recognisable of all owls, characterised by its distinctive white plumage, which gives it good camouflage against the snow. Male and female snowy owls can be distinguished by their markings; males are nearly all white, while females are marked with dark bars.

These large, powerful owls have an impressive wingspan reaching up to 1.5m and can weigh up to 2.5kg. They also have rudimentary ear-tufts, although these are not normally visible. They have relatively small eyes, which are bright golden-yellow, framed with black eyelids. The legs and toes are thickly feathered, and the short, dark beak is nearly concealed by the long facial feathers. Snowy owl calls include a deep, booming ‘kroo-kroo’ or ‘hoo-hoo’, along with a rapid, repeated cackling ‘ka’ or ‘ke’. While the female may also produce a loud, intense whistling note.

Unusually for an owl, the snowy owl hunts mainly during the day. They can locate prey using both sight and sound, and can hunt in all weathers. Prey may be taken from the ground, in flight, or from water. They have a varied diet including rodents and other mammals, birds, fish, amphibians, insects and sometimes carrion. However, their main prey, when available, is lemmings.

Breeding occurs in the spring and during courtship, the male performs an aerial display flight, sometimes carrying a lemming in the beak or claws.

The female builds the nest which is a shallow hollow on the ground, usually on a slightly elevated mound or boulder. They usually lay three to five eggs and the female incubates them for 31 to 33 days, while the male brings food to the nest. The young snowy owls may leave the nest after two weeks, but are unable to fly until about seven weeks old, and will remain dependent on the adults for a further ten weeks. As their mating season depends on the availability of lemmings it does mean that some individuals only breed once every three to five years if prey is scarce.

Snowy owls live mainly in areas of tundra and marshes in the Arctic regions and are rare vagrants to the UK. The last known pair nested on the island of Fetlar in the Shetland Islands in 1975 and they are occasionally sighted there.