We have a bachelor group of ring-tailed lemurs at Edinburgh Zoo.

Our group of ring-tailed lemurs can be seen in the lemur walk-through enclosure.

Our ring-tailed lemurs are part of the European Stud Book Programme (ESB).

Threats in the wild

Despite being protected by national and international law and an iconic symbol of Madagascar, the ring-tailed lemur is thought to be at serious long-term risk of extinction. The greatest threat to this species comes from widespread habitat loss, with its forest habitat being reduced by a combination of burning, overgrazing and wood harvesting for charcoal production and illegal hunting 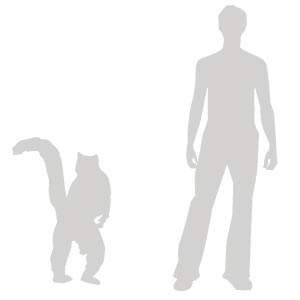 The ring-tailed lemur (Lemur catta) is impossible to confuse with any other lemur species, with their distinctive long, thick, black-and-white ringed tail.

The ring-tailed lemur is active both day and night and spends much of its time on the ground, although it is also able to move well through the trees. They can also be seen sunning themselves by sitting on their haunches and spreading their limbs in a yoga-like position, exposing its underside to the sun.

They have quite a varied diet including fruit, leaves, flowers, bark and sap, as well as large insects and even small vertebrates.

They are a very social species, often occurring in large groups, usually containing equal numbers of males and females, plus their young. Within the group, females are dominant over males, with an ‘alpha female’ in charge of the group. There are well-defined dominance hierarchies between group members and although these groups are not strictly territorial, they do occupy preferred, overlapping home ranges and show strong territorial defence when they come into contact with another group.

Both male and female ring-tailed lemurs use scent marks to mark their home range, they also communicate using a wide range of vocalisations.

Mating season usually takes place over a short period in mid-April. The young are then born around September after a gestation period of approximately 130 to 144 days, so that the young lemurs are weaned just as food becomes more plentiful. Male ring-tailed lemurs compete for access to females by covering their tails with scent from their wrist glands and wafting this pungent odour towards their opponent. These ‘stink fights’ are usually enough to establish rank, but physical aggression can also occur.

The female ring-tailed lemur usually gives birth to one infant although occasionally twins are born. The young clings to the female’s underside at first, but after a couple of weeks it moves around on the female’s back. At about 2.5 to 3 years old they reach sexual maturity, and females usually give birth once a year. Female ring-tailed lemurs rarely leave the group into which they were born, but males leave the group, and will continue to move between groups every three to five years throughout their lives.