Our red-fronted macaws can be found in the aviaries behind the Education Centre.

This pair of macaws have not yet reared any chicks, but we know from previous breeding seasons that they will lay fertile eggs and incubate them. Our birds are genetically quite important in the European Endangered Species Programme (EEP), co-ordinated by staff at Edinburgh Zoo, so we hope that they will breed in the future.

You might have noticed that two of our macaws look a bit different. They have a condition called feather plucking, which affects parrots for a variety of reasons.

We manage the European Breeding Programme for red-fronted macaws and knew these birds had this condition. By bringing them to live with us we can provide them with a great quality of life, hopefully encouraging them to breed in the future.

Macaws are very social parrots, we plan to keep ours in a group, allowing them to choose their own pairs for the breeding season.

The red-fronted macaw (Ara rubrogenys) is native to a small area on the east Andean slopes of south-central Bolivia.  It is estimated that there may be fewer than 500 breeding pairs left in the wild.

The red-fronted macaw is a medium-sized parrot, typically measuring about 55 – 60 cm (21.5 – 23.5 inches) long.  It is mostly green, with a red forehead and red patches over the ears and on the bend of the wings.  It also has blue primary feathers. Males are slightly larger than the females and have a heavier beak, but otherwise the sexes are quite similar.

This species’ original natural habitat was dry forest, but centuries of human activity causing habitat degradation and destruction has caused red-fronted macaws to be found mostly in thorn and cactus scrub.  The red-fronted macaw’s diet includes seeds and fruit.  However, natural food sources are often scarce, causing macaws to feed extensively on crops.  This causes conflict with farmers, who view the macaws as a crop pest and kill them.

One of the major threats to red-fronted macaws is habitat destruction, due mainly to overgrazing by goats, firewood cutting and charcoal production.  Illegal trapping for the pet trade is another major threat to this species. 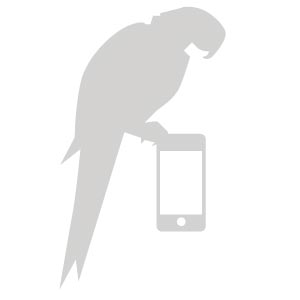