The rainbow lorikeet (Trichoglossus moluccanus) is 25-30cm from head to the tip of its tail. Its wing span is 17cm and they weigh between 75g and 157g. They have very bright colouring which includes an orange beak, a blue head with green on the back and the chest is a red-orange with black bars and it has green wings and tail. Baby lorikeets have black beaks and eyes which changes to orange as they grow older.

These birds eat a variety of fruits, pollen and nectar. In their native countries they can frequently be observed feeding in urban gardens and will also accept food out of a human’s hand. Lorikeets are specially adapted for a diet consisting mostly of nectar and pollen. The tip of a Lorikeet’s tongue has a collection of tiny hair-like structures called papilla that help them excavate pollen and nectar from flowers. This adaptation is why you’ll sometimes hear Lorikeets referred to as “brush-tongued parrots.”

Rainbow lorikeets live in rainforests, coastal areas and woodlands and can now also be found in many built up areas due to habitat loss. Their natural range is Australia, Eastern Indonesia, Papua New Guinea, New Caledonia, Solomon Islands and Vanuatu. Rainbow lorikeets have also been introduced into Hong Kong, Perth (Australia) and Auckland, in the latter of the two they are considered a pest.

Rainbow lorikeets reach sexual maturity at the age of 2 and mate with one bird for their whole life. In Australia rainbow lorikeets breed in the spring months (September-November). The female will lay between 1-3 eggs which are incubated by the female for approx. 25 days. 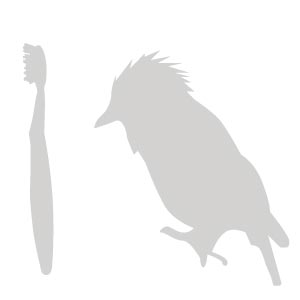 Relative to a toothbrush