We have two small groups of meerkats at Edinburgh Zoo.

A group of female meerkats can be found in Meerkat Plaza, at the front entrance of the zoo. While a second small group of male meerkats is on show in the enclosure opposite Brilliant Birds.

Meerkats (Suricata suricatta), live in groups of between 20 and 30 individuals. The groups are also called, mobs, clans, or gangs, and live in underground burrows. They are highly social animals and are very active during the day.

They are pale brown on the underside and on their face, with silvery-brown on the upper parts and eight darker bands on their back and dark eye rings with a dark tip to their slender tail.

Meerkats are generally insectivores, however they will also eat lizards, scorpions, snakes, spiders, millipedes and centipedes. While most of the pack members forage for food, some of them will act as sentries, keeping an eye out for danger. These sentries will bark when a threat is spotted to alert the group who will then run for cover. Once the sentry stops barking the group will resurface.

Only the alpha pair are allowed to reproduce, if any of the subordinate females produce pups, they can be ousted from the group or their pups killed. They can have litters anytime throughout the year, however the most common time is the warmer summer months. They give birth to up to five young in a single litter, after an eleven week gestation period. The pups are kept in the burrow until they are three weeks old, and then they will begin to learn how to forage at four weeks old. The whole clan will help to look after the pups with the other females even producing milk for them. 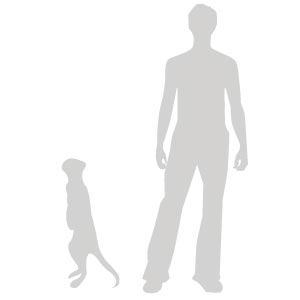 Treat yourself or the animal lover in your life to an unforgettable experience!