We are currently home to a female margay called Sarah.

The margay can be found in behind Wee Beasties.

The margay (Leopardus wiedii) is a small patterned cat which ranges from northern Mexico, through Central America, and into South America. They are also known as the tree ocelot. They vary in colour from greyish brown to tawny yellow and have rows of dark spots on their coats. Their heads, neck and throat have black lines and similar to a tiger, the backs of their ears are black with a white spot in the centre. Both males and females are similar in size and appearance.

The margay is sometimes confused with its close relative the ocelot (Leopardus pardalis, however they are smaller, more slender, have larger eyes and longer tails.

The margay is most commonly found in forested areas and while they spend most of their time in trees they will also hunt on the ground. They are agile climbers, using their broad feet, flexible toes and large claws to grip, and its long tail for balance. Their hind feet can rotate inwards through 180°, allowing them to grip a tree trunk, and making it the only cat capable of climbing headfirst down vertical trees.

These solitary cats are usually active at night, spending the day resting in trees. They hunt small tree dwelling mammals and birds, as well as reptiles, some insects and fruit, and sometimes larger prey such as young deer or agoutis.

These cats may breed all year round in tropical areas and the female usually gives birth to a single young, or sometimes twins, in a den made out of a hollow log or burrow after a 84 day gestation period. They are quite large when they are born but they do not reach adult size until nearly a year old, and does not begin to breed until two to three years old.

Margay populations are not well known, but it seems to occur at low densities. A few decades ago, it was heavily exploited for the international fur trade. Due to their small size it meant that at least 15 skins were needed to make a single fur coat. Despite the introduction of legal protection, illegal hunting is continuing to be a problem in some areas, and they are sometimes also taken illegally for the pet trade.

Aside from this, the main threat to the margay is habitat destruction through deforestation, as a result of large amounts of the Amazon being cleared for agriculture, pasture, and road building. As this species live in the trees in small densities and low reproductive nature make it highly vulnerable. Populations within the Amazon are expected to become more fragmented over the next ten years and in light of all these threats, the IUCN warn that the species is likely to qualify as Vulnerable in the near future.

International trade in the margay is currently banned under its listing on the Convention on International Trade in Endangered Species (CITES), and it is legally protected across most of its range. Little is often known about small cat species, however modern techniques such as camera traps and radio tracking are helping to improve our knowledge of some of these species, so we can help to conserve these beautiful cats. 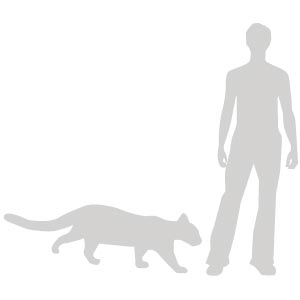 Population is decreasing, IUCN May 2014