We are home to a mixed herd of lowland nyalas.

They can be found in our African plains enclosure.

Our herd of nyala are managed by the European Stud Book programme.

The lowland nyala (Tragelaphus angasii) is a medium-sized antelope that is native to south-eastern Africa.  It inhabits dense thickets, forest, and open-thicket woodlands.  It is very shy and cautious of approaching open spaces, and most sightings of nyala are at water holes.

Nyala are a sexually dimorphic species which means that males and females look quite different from one another.  The male nyala is larger than the female, and has a shaggy, dark-brown coat that ranges into grey, sometimes with hints of blue, as the animal ages.  Females have a much more reddish-coloured and shorter coat, with bold white stripes.  The coat of the male also has stripes, but they are much fainter than those of the females and are sometimes obscured by its shaggy fur.  The male has long, spiralled horns and a long fringe on the under-parts, while females do not have horns or fringe.

They live in groups of anywhere from 2 – 30 individuals.  Old males tend to be solitary.  They are most active during the early morning and late afternoon hours, taking shelter in the shade during the hottest parts of the day.  Their main wild predators are leopards, lions, and painted hunting dogs.

In the past, Nyala disappeared from much of their range due to habitat loss caused by farming, over-grazing by cattle, hunting by humans, and rinderpest infection.  However, effective habitat protections, species management, and re-introductions of nyala to areas where they had been wiped out have helped the nyala to bounce back. 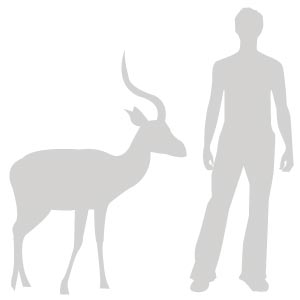