We are home to four L'Hoest's monkeys here at Edinburgh Zoo - Jamal (meaning handsome), Tala, Sheli and her youngster Butembo who was born here in May 2020.

The L'Hoest's monkeys are part of the the European Endangered Species Programme which is managed by Edinburgh Zoo.

The L’Hoest’s monkey (Allochrocebus lhoesti) can be found in small areas of the Democratic Republic of the Congo, Rwanda and Uganda. They can be found in a range of different kinds of forested areas, including gallery forest, mature lowland rain forests, wooded savannah at mountain slopes, and forest borders.

L’Hoest’s monkeys have a short, brown coat with a reddish-brown colour across the back and dark brown or black underparts. They have a white chin ruff, or “beard,” and white patches under their eyes. They live in groups that are dominated by females. There is usually only one male in a group, but sometimes more than one male will be included. If this is the case, there is competition for dominance between the males. Only one male is allowed to mate with all of the females.

They eat leaves, seeds, flowers, fruits, and insects, although they will occasionally eat bird eggs, lizards, and even small birds. They travel mainly on the forest floor, but flee up into the trees if threatened.

The population of L’Hoest’s monkeys in the wild has shown large decreases, and experts expect further declines in coming years. One of the main threats is deforestation of their habitat. This is due to expansion of farming. They are also hunted for bushmeat, and are frequently snared or shot by hunters. Because the L’Hoest’s monkeys’ range is an area of warfare and intense human conflict, these threats are made even worse. 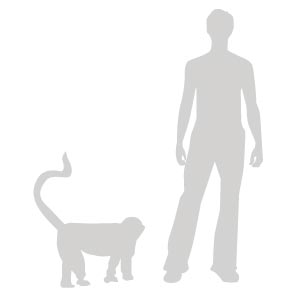