We currently have a small group of dik-diks, a male named Drax, a female named Ali, and their offspring.

They can be found in the African Aviary.

The dik-diks are managed by the European Stud Book Programme.

Dik-diks are found in extreme south-eastern Somalia, central and southern Kenya, northern and central Tanzania, southwestern Angola, and Namibia. Dik-diks are shy and elusive, concealing themselves in brush most of the time. When startled, however, they take off in a series of zigzag leaps calling "zik-zik" or "dik-dik," hence their common name. They occupy a wide variety of habitats, including dry scrublands, savannah woodlands and thickets, and grasslands.

Kirk’s dik-diks typically weigh up to 7 kg (15 lbs). They have a reddish-brown head, large eyes and ears, and a soft, brown coat that is grizzled with grey, black and white hairs. The eyes are ringed with white hair. Males have horns, but these can often be hidden by a spiky tuft of fur. Both sexes have an long snout which has blood vessels close to the skin which that allows any excess heat to be lost and lowering their body temperature.

They get their name from the ‘dik-dik’ call they make when startled. They will jump from their hiding place and move in a series of zig-zag leaps whilst making this call, aiming to confuse predators. They tend to form monogamous mating pairs. The female give birth to one offspring after a gestation period of about 5 – 6 months, and can have up to 2 offspring per year.

In the wild they eat a variety of leaves, buds, shoots, grasses and fruits. They are the prey of many carnivores, including lions and other big cats, hyenas, painted hunting dogs, ratels, and others. Large birds and reptiles will also prey on these small, slender antelopes.

Despite this and some disturbance in habitat due to farming expansions, their numbers remain strong in the wild. Their ability to exist in scrub and over-grazed areas has given them a measure of resilience that prevents their numbers from dropping too severely. 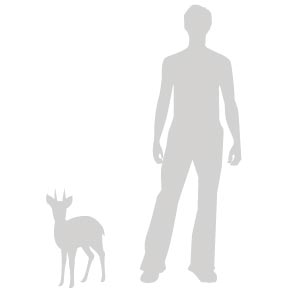