There are three Grevy’s zebra here at Edinburgh Zoo - Emily, Grace and Daniella.

You can help feed and care for Grace, Emily and Daniella and other threatened animals around the world by donating today - if you can, please support our Survival Fund.

Grevy’s zebra face numerous threats in the wild including disease, competition for grazing and water from local cattle, donkeys and plains zebra, and high predation rates by lions and humans. They were once poached heavily for their skins, but thanks to effective protection measures in Kenya this has declined.

The species is found in northern Kenya. Recent conservation efforts in the field are helping Grevy’s zebra to survive in the wild. The Lewa Wildlife Conservancy is a particular stronghold and is home to over 450 individuals.

There is also a small population of about 100 Grevy’s zebra in Ethiopia which is sadly expected to disappear soon.

Our zebra are part of the European Endangered Species Programme (EEP).

Find out more about some of our conservation projects. 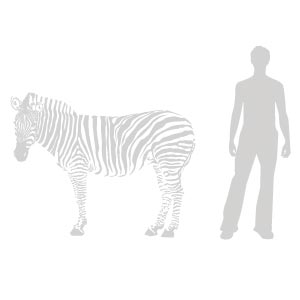