We currently have two Egyptian vultures at Edinburgh Zoo, one male and one female

Location in the Zoo

Our Egyptian vultures can be found near the gelada baboons.

Our Egyptian vultures are managed by the European Stud Book programme.

While the Egyptian vulture is normally a solitary bird, or is seen in pairs, large groups of vultures may congregate at feeding sites or at communal night roosts. Each day, they can travel up to 80 kilometres in search of food. They are opportunistic feeders and will eat a large range of food that they encounter.

Carrion comprises the majority of its diet, including dead birds, small mammals, livestock and large wild animals. It will often feed on the scraps of large carcasses after other vultures have consumed the majority of the soft flesh. They will also scavenge on a wide range of organic waste, including rotting fruit, vegetables and even excrement, and will sometimes prey on small animals, particularly those weak or injured, such as rabbits, chicks, spawning or dying fish, and some insects. The Egyptian vulture also consumes eggs and will throw stones at them to break open the shell – an incredible and rare example of tool-use in birds.

The adult plumage is white with black feathers in their wings. They have a long slender yellow bill with a black tip. The neck feathers are long and form a hackle. They have approximately1.5 - 1.7m wing span and typically weigh 2 kilograms.

The Egyptian vulture is largely a monogamous bird, and undertakes a courtship which includes undulating flights and mutual preening. The pair will construct a nest on a cliff, either in a cave or on a ledge protected by an overhang, or very occasionally in a tree. The nest is built of sticks and lined with masses of wool, hair, rags or the remains of food, and measures an impressive 1.5 metres across. They typically nest between February and April both parents incubate and hatch two eggs after approximately 42 days, the second egg usually hatches 3 - 5 days later. Young fledge the nest after 90 to 110 days.

The cause of decline is not currently known as adult birds have no predators; however it has previously been linked to poisoning by the accumulation of lead and pesticides, and also by electrocution due to power lines. 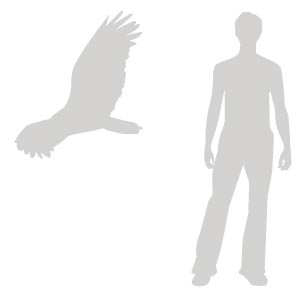