We are currently home to an adult male Chinese goral called Danling who was born in 2011.

Edinburgh Zoo’s Chinese goral is housed near the front of the Zoo, opposite the Darwin’s rhea.

Our Chinese gorals are part of the European Stud Book Programme and are managed by RZSS.

Chinese gorals (Naemorhedus caudatus arnouxianus) can be found through much of southern, south-eastern and central China. They live in steep areas and plateaus in mountainous areas.

They live in herds of between two to twelve individuals, although older males occasionally live alone. After a gestation period of approximately seven months the female gives birth to a single kid. Newborn gorals are able to stand within an hour of their birth, and by the second day can follow their mother through their steep and rocky terrain. The lifespan of the Chinese goral is approximately ten years.

They eat grasses, leaves, twigs, and nuts. They have very keen eyesight, and depend more on this than on their senses of smell or hearing to detect danger or predators.

Due to over-hunting and habitat destruction, the number of this species is thought to be declining. 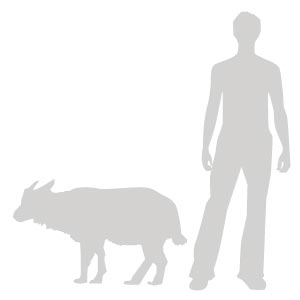